Business On The Outside, Blumenau Model Train Set On The Inside 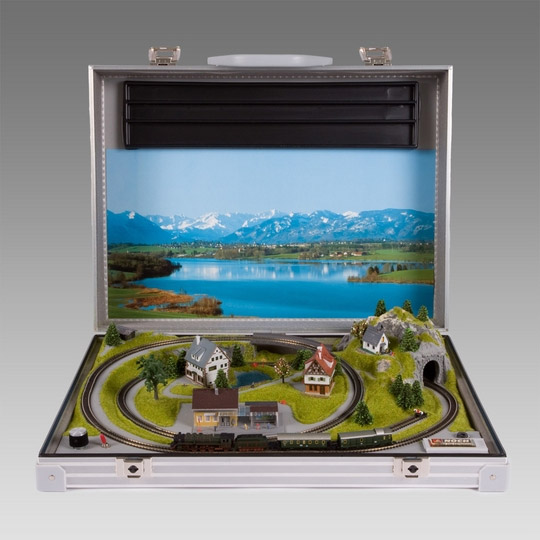 Do you know any train enthusiasts who actually work as lawyers and accountants?  Neither do I.  If you love trains and want to pretend to be a professional who carry plenty of documents on  a briefcase, though, a “Blumenau” Model Train Set should be all you need to get by.

I’ve never been a fan of model trains.  However, I can imagine the joy your mother must end up feeling when she sees you decked in a three-piece suit carrying a briefcase on one hand and a business-looking Blackberry on the other.  “My son, the grown-up,” she exclaims to herself as she dreams of the day you will finally leave her basement.

Little does she know that the briefcase actually carries neither important papers nor number-crunching reports.  Instead, it houses a pre-assembled “Blumenau” model train set that runs around the same route over and over.  Craftily designed, it features a scenic route that takes the locomotive over a bridge, around some houses, through a mountain and back the same route until the end of time.

The inner panel of the top case comes with a summer landscape print of a serene lake that probably mimics your mind’s undying simplicity.  You enjoy it via a battery-powered locomotive with two carriages, running at speeds you can vary with an onboard throttle controller.

In case you don’t want anyone finding out that your Noch briefcase actually houses a “Blumenau” Model Train Set, you can count on the security of its 100% aluminum frame and built-in keylocks.  Price is a little off the tracks, however, at $1,500, so you probably need to be a well-paid geek to afford one in the first place.

or Check out these deals available on Blumenau train sets on the net.