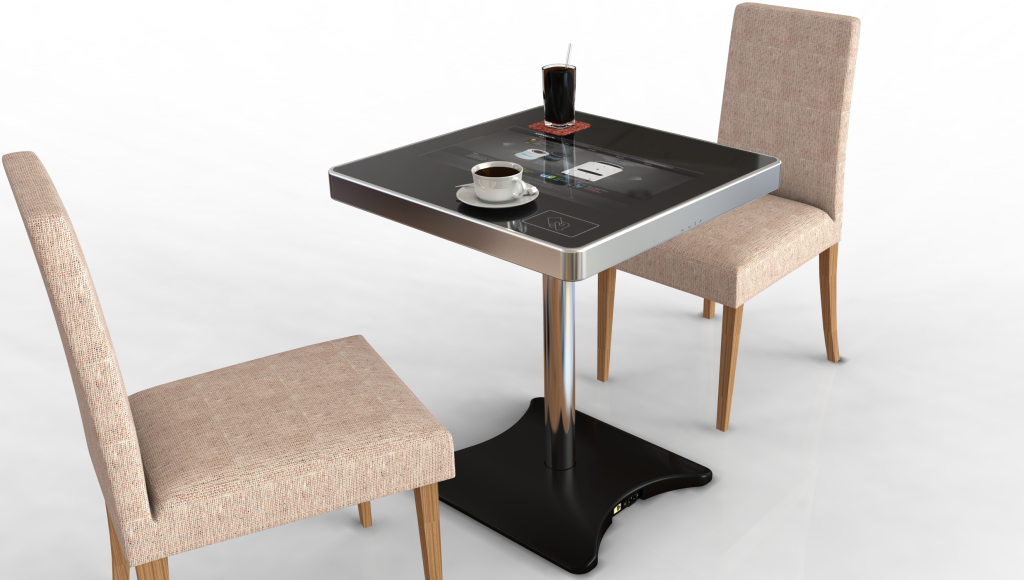 You know how some restaurants are already putting iPads in customer’s tables so they can automate browsing through available food items, ordering and even paying?  The Table Touch PC does the same thing, except it takes the integration further with a touchscreen computer built right on the tabletop.  That way, establishment owners don’t have to bother with securing individual slates to the tables, making the whole process a “put the table down and play” affair.  Moneual is angling to market it not just to restaurants, but to a whole host of other public establishments, including hospitals, airports and hotels. 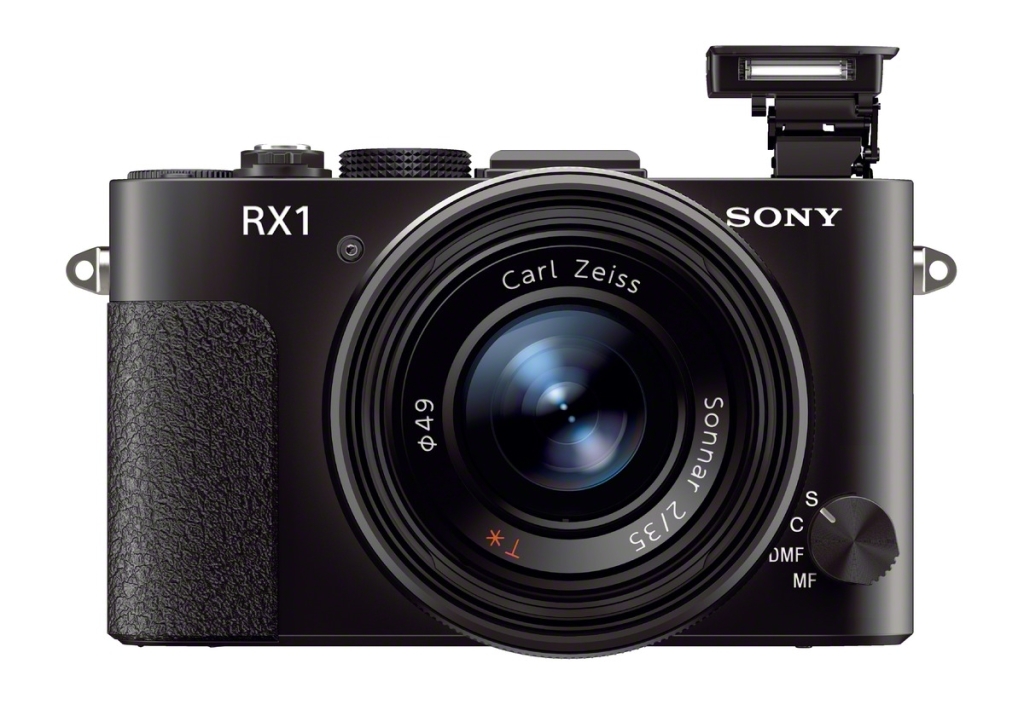 Not interested in pocket cameras?  You might want to think twice, cause this is no ordinary compact shooter.  Instead, the Sony Cyber-shot RX1 manages what nobody has done before — put a full-frame sensor (equivalent to 35mm film) on a camera that measures just 4.5 x 2.6 x 2.25 inches.  And it doesn’t stop there.  Billed as a “professional compact,” it gives you many of the creative options you can get from a high-end DSLR, all while sliding comfortably in a jacket pocket (or pants, if you still rock those MC Hammer trousers from back in the day).  Details of the camera include a full-frame 24.3MP Exmor® CMOS sensor, f/2.0 Carl Zeiss Sonnar T* lens with 9 aperture blades, full HD 24p video, and 14-bit raw image capture.  It hits stores in December, priced at $2,799.99. 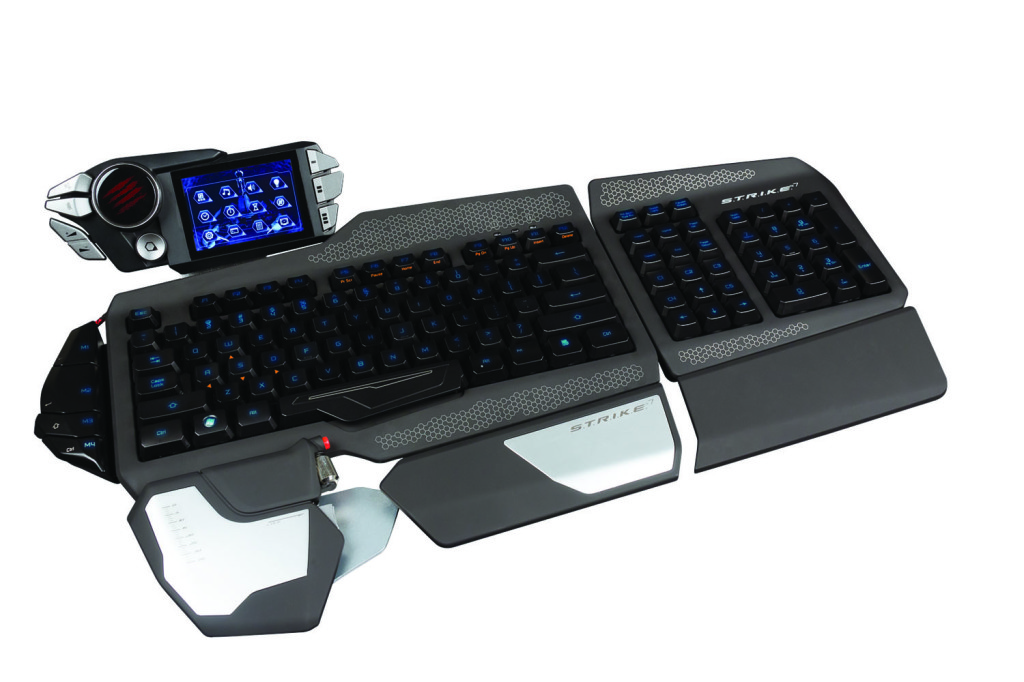 A lot of keyboards have been billed as the “ultimate gaming keyboard” by everyone from overzealous manufacturers to overhyping bloggers.  Giving the $300 Mad Catz  S.T.R.I.K.E.7 that moniker, however, feels apt.   The integrated touchscreen, for instance, simplifies flipping through different programmed settings, creating macros and navigating different keyboard functions.  The fact that you can use it for other functions like adjusting volume, initiating in-game calls and launching apps just streamlines your computing by a whole lot.    Want more comfortable keys when you’re playing?  The keyboard comes with  replacement contoured and rubbed-edged keys for WASD and cursor characters, which you can easily switch in place of the standard keys.   Programmable macro buttons?  Check.  Laser-etched backlighting?  Check.  Integrated palm and wrist rests?  Check.

The S.T.R.I.K.E.7’s prowess starts with its modular design.  All the different modules (including the VENOM touchscreen, the main keyboard, the numpad, the function strip, and the 3-part palm/wrist set) can be detached and attached to a different part of the assembly.   Just want to use the numpad and the touchscreen when you’re playing?  Simply detach the main keyboard, then put the touchscreen, the palm/wrist rests and the function strip on the numpad.  Want your numpad on the other end of the table?  Just detach and place it in your ideal location.    Yep, that’s gaming exactly the way you want it.

It may feel silly paying premium for a pair of earbuds, but the Sennheiser IE800 is exactly the kind of tech that deserves that $999.95 ticket price.  The laundry list of features include a “perfected extra wide band transducer system” that measures a mere 7mm in diameter (smallest available in the category), dampened two chamber absorbers, dual protective meshes (one in the cushion, another in the cone), and oval-shaped ear adaptors promising maximum comfort.  Promising extremely deep bass, very low harmonic distortion, and capable performance even at high sound pressure levels, the Sennheiser IE800 is really in a class all its own.

Why get a conventional looking stereo system when you can get one that looks like a satellite dish?   While that may seem like an odd idea, the execution on the BeoPlay A9 certainly begs to differ, packing a complete stereo system (5 power amps, 1 woofer, 2 midrange drivers, and 2 0.75-inc tweeters) inside a stylish-looking dish that can adorn modern home theater systems beautifully, whether standing on its tripod legs or mounted on a wall via the handle in the back.  It’s also compatible with both Apple Airplay and DLNA, so your iOS and Android devices can wirelessly pipe tunes its way.  If you’re old school, there’s also both a mini-jack and a phono connector for tethered playback.  Measuring 70.1 x 90.8 x 41.1 cm, it’s also plenty portable, so you can easily move it room to room. 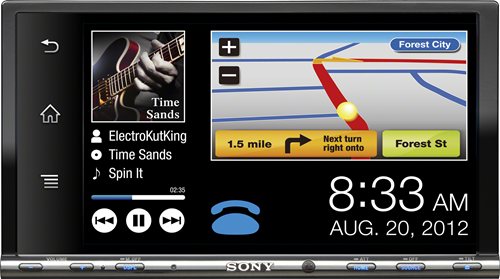 Forget about figuring out ways to put your smartphone in the dash — the Sony XAV-701HD can do the job while your phone stays in your pocket.  Armed with Mirrorlink technology, it can mirror everything in your smartphone on the onboard 7-inch touchscreen display, giving you full access to your apps on a larger screen in the dashboard.  Whether you want turn-by-turn instructions, music from your iTunes library, or internet radio, just pick out from the console and enjoy.  There’s built-in Bluetooth, too, so you can make hands-free calls as if your phone was mounted to your vehicle.  It hits stores this November, priced at $699.99.

Want to control your car amp from the comfort of your phone?  Install the Phoenix Gold ACX600.5 and have full command of your sound system from that tiny screen, using the downloadable app to adjust gain, balance, fade, subwoofer level, phase, EQ, listening position, bass boost and more. 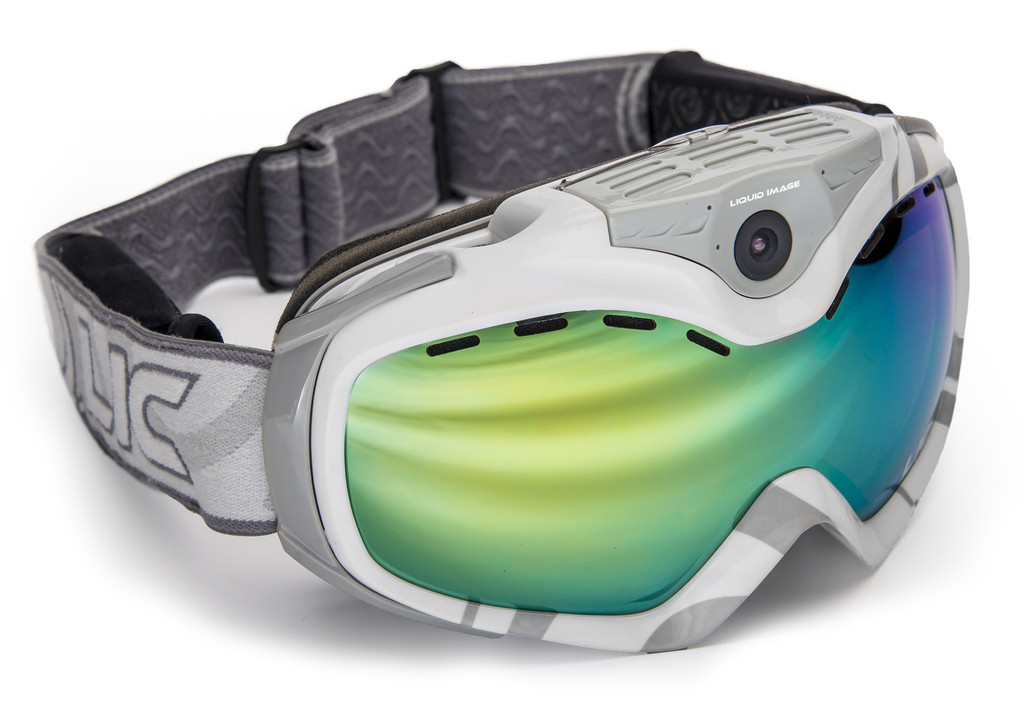 While you can always attach an action cam to your helmet to capture your trips down icy slopes, the Apex HD+ saves you from the extra gear, throwing in a full HD recording system inside a pair of snow goggles.  Not only can it record in hi-def (1080p at 30 fps and 720p at 60 fps) using a 135-degree wide angle lens, your friends can control the camera through a smartphone over WiFi, as well as monitor your run via live streaming.  Features include microSD card recording, water-resistant construction, continuous shot photo mode (at 12 megapixels), and audio wind guard technology to ensure the sound capture is as good as the video.  It’s currently available for $399.99. 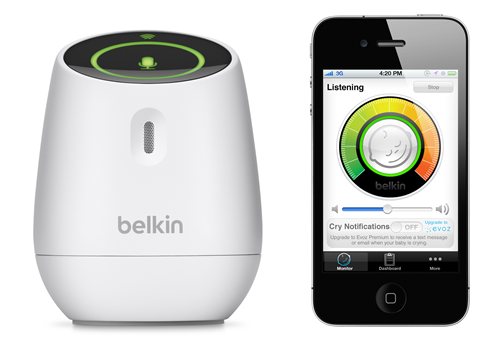 When keeping an eye on your baby 24/7 isn’t feasible (and, let’s be honest, it isn’t), a baby monitor lets you get through the rest of the day without having to worry every five minutes.  Problem is, it adds another gadget to carry around — something we can all agree we don’t need anymore with all the devices we already carry around.  The Belkin WeMo Baby solves that problem by replacing the baby monitor’s receiver with your iOS device, so you can hear everything going on in the baby’s room on your iPhone, iPad or iPod Touch.  It’s available now for $89.99. 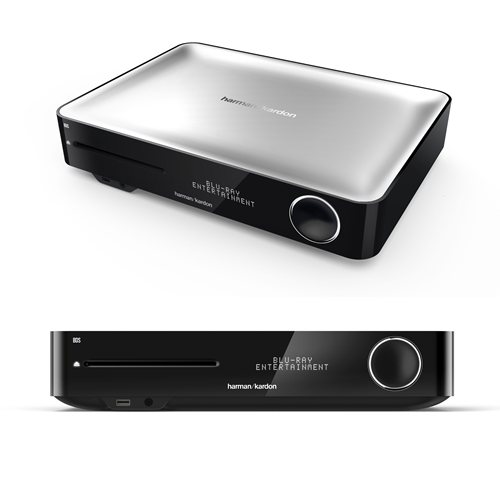 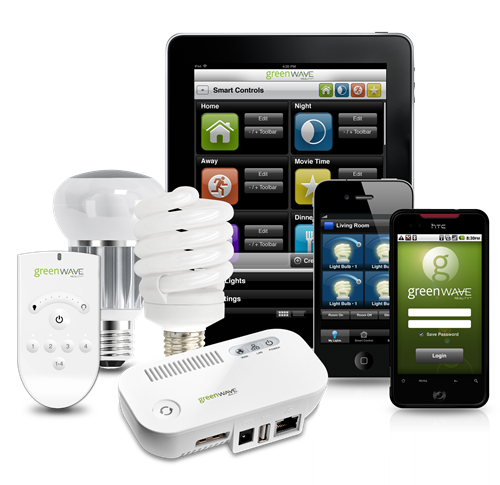 You already use your phone for everything, so why not use it to control your home’s lighting system.   That’s what the Greenwave Realty Connected Lighting Solution does, replacing your existing lighting units with their Energy-Star Connected Bulbs, which communicate with an IP-enabled home lighting gateway that you can control from PCs, smartphones or a handheld remote.  Up to 500 bulbs can be set up in a single network, all of which you can control and even pre-program for automated operation.

iPhone cases are a dime a dozen.  But if you want the perfect case, nothing beats being able to design your own.  With the advent of affordable 3D printing, you can do just that using Sculpteo’s 3DPCase app and accompanying service.  Available as both a web app and an iOS app, it lets you customize an iPhone case based on five different templates.  Once you’ve created your dream case, you can order the creation from Sculpteo, who will then produce the product on demand using professional hi-res 3D printers.  Price for the custom iPhone cases start at $29.89.

While there’s no way people are likely to use the SpareOne as an everyday phone, it’s exactly the kind of handset you want to keep as a backup.  Features are slim: it allows incoming and outgoing GSM calls, it has Speed Dial (up to nine numbers), it has an easy-to-replace SIM, and there’s a torch light on top in case you’re fumbling in the dark.  It’s usefulness, though, can prove a godsend when your main phone’s battery drains out or if your network has no signal in the area.  Powered by a single AA for up to 10 hours of talk time, you won’t need an outlet to charge it — just pop in a working AA and go.  No signal?  Just hit the Emergency button and it will connect you to emergency services in the area.  You can buy it now for $99.99.

The LG 84LM9600 is one of only two 4K TVs released in the US this year.  It’s also the first, making the 84-inch behemoth a groundbreaking piece of consumer tech.  And it doesn’t stop at the ultra-sharp resolution either, bringing onboard upscaling, edge-lit operation, 2.2 speaker system, Cinema 3D, 2D to 3D conversion, Magic Remote (with voice control), WiFi, and LG’s Smart TV Suite along with that 4K goodness.   It’s available now for $19,999.

With a display spanning 85 inches, it’s set to become the largest UHD TV in the market.  The company is keeping most  of the details under wraps.  Given the kind of feature set found in LG’s and Sony’s UHDTV’s, we’re guessing the Korean company is throwing as much as they can into this as well.

In a nutshell, the Vuzix Smartglass puts a heaping of things you normally do on a smartphone inside a weird-looking gadget you wear from one ear to the area in front of one eye on the same side of the face.   The gadget bundles a tiny 16:9 WQVGA full color display (shows your smartphone display, basic web content and other data sent by the accompanying app), an in-ear piece and a mic (for hands-free calls), a 720p video cam, integrated GPS and head-tracking sensors, wireless connectivity (Bluetooth and WiFi) and a microSD card slot (for storing videos and pictures).  There’s also an onboard processor running Android, which allows it to be independent of the phone and run apps all on its own, making it, basically, a computer hanging off your face.  While the resulting appearance may look a little dorky (a lot actually), the tech saves you from having to pull out your phone every time you want to take a quick video, scan a barcode (for price apps) or make a call — just use the predefined voice commands and gestures to do the same things hands-free. 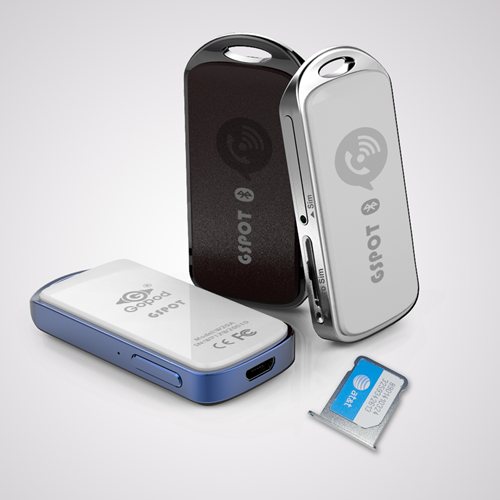 When you travel a lot, you realize the value of dual SIM phones.  Problem is, you already have an uber-expensive premium smartphone that only takes one SIM and you have no intention of buying a new phone any time soon.  Enter Gspot, a mobile device that can take up to two SIMs and make them both available on standby for your smartphone.  Designed to work with both iOS (jailbroken only) and Android handsets, the device gives you access to two extra SIM cards over Bluetooth, letting you make calls, send SMS messages and do, pretty much, whatever else you do on your primary carrier’s network. The gadget, which comes in two models, has an onboard rechargeable battery that can keep the backup SIMs up and running for up to 7 hours of talk time.

Styled as a wristwatch for the hearing-impaired, the Moneual Smart Care System will detect noises and sound, identify them (e.g. “Ring, Ring,” “Honk, Honk”) , then transmit the information to the user in the form of a text alert.    That way, wearers of the tech can have better awareness of the sounds in their surroundings, allowing them to function more effectively wherever they may be.

Switch Lighting’s LED bulbs have become an equally bright but considerably more efficient replacement for incandescent bulbs.  Their newest product, the 3-Way, is the first and only LED incandescent replacement in the market that’s designed for use with three-way lighting fixtures, offering three lighting levels (equivalent to 25,50 and 75 watts), incandescent-level illumination, and instant-on operation.  On top of that, it consumes 80% less energy and lasts 25% longer than traditional incandescent bulbs.