Chain Condoms: Protection For Your Drivetrain 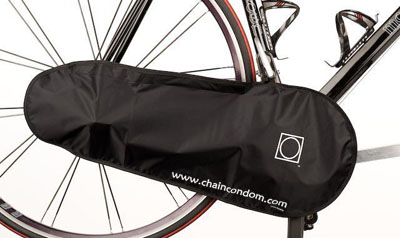 When I first heard of the Chain Condom, I imagined something naughty, like a prophylactic with shackles of sorts.  Instead, it turned out to be something a good deal less shocking and a little more useful in the non-risque variety.

Just like actual condoms , the Chain Condom keeps bicycle chains from putting their grease and grime at everything in its vicinity.  Designed for folks who  frequently carry their bikes at the back of their cars (fit and athletic outdoor types like you, of course), it’s a heavy nylon cover with a hook-and-loop closure sized to fit most any type of bicycle drivetrain (even mountain bikes and triple chain rings).

Created by a professional biker for his own use, it gained immediate popularity among his peers, who saw just how well it worked to keep grease from spreading outside the bike.  According to the site, the name was coined by the legendary Lance Armstrong himself, who asked inventor Dave during the 2005 Tour de France if he’s “got any of those chain condoms?”

Back when I still owned a bike, I used to wrap a dirty towel over the derailleur, gears and chain to keep that nasty grease from spreading (didn’t always work).  This sounds like a much simpler solution, apart from having such a dirty, dirty name.  The Chain Condom is available from the manufacturer’s online site, as well as from several retail establishments, for $20.