Chalk Talk Mug Doubles As Canvas For Your Thoughts 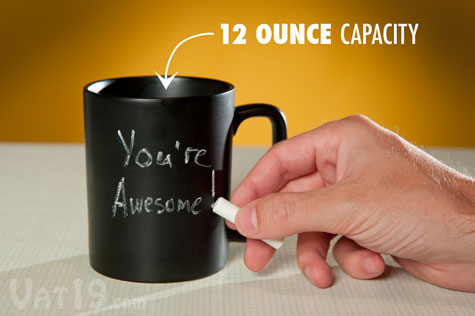 Coffee mugs with a cute graphic or a funny slogan is fine.  After a couple of weeks with the same joke, though, it just sounds trite.  End the tyranny of tired comedy with the Chalk Talk Mug, a blank drinking vessel that also doubles as a functional chalkboard.  That way, you can write “My Boss Is Satan” one minute and change it to “My Boss Is #1” right before the staff meeting.

Yes, it’s your personal graffiti canvas in the form of a mug.  Just pick up a chalk, wax it over the chalkboard glaze and amuse yourself with something clever.  Or witty.  Or depraved.  Hey, you can always erase it, so let your creative spirit loose. 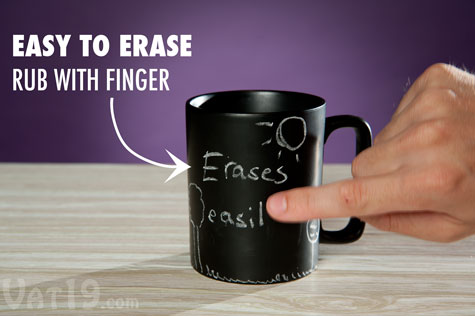 The Chalk Talk Mug is a regular 12oz mug, covered with a special glaze that turns its entire surface area into a usable chalkboard.  Not only can you write on it with a chalk, you won’t even need an eraser to clear out your last lame remark – rubbing with your finger erases every trace of any failed attempts at being clever.  It remains microwavable and dishwasher-safe too, so you can handle it just like any of the cups you drink your morning coffee from.

Obviously, this can serve even more purposes than a personal billboard for your daily thoughts.  You can use it to communicate silently with your cubicle neighbors (“Boss is coming”), jot down quick notes (“Meeting at 5pm”) or serve as  a place where people can leave messages while you’re away (“You’ve been fired”).  Pretty useful for an $8.95 coffee mug, eh?