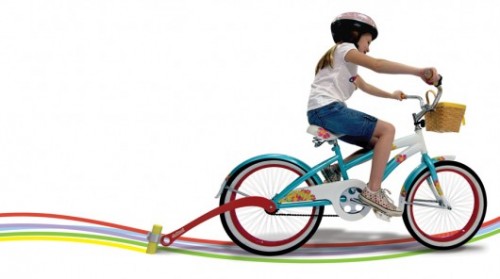 Remember the Razor Graffiti Chalk Scooter?  Well, kids on kick scooters aren’t the only ones who can vandalize the streets with gobs and gobs of colorful lines.  Kids on bikes can join the fun, too, with this Chalktrail Bike Attachment.

Designed to hook onto the rear dropout of a bike, the attachment adds an arm with a mount for holding a single thick stalk of chalk on the end.  Ride the bike as you normally would and you’ll be going around town scribbling colorful stripes on the ground. 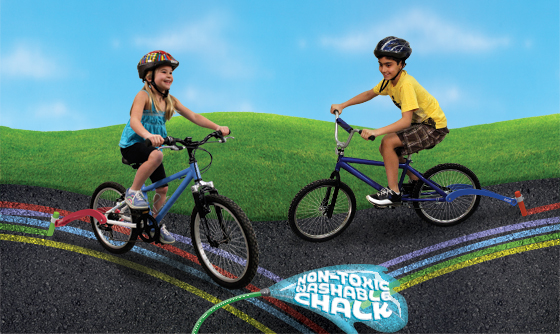 The Chalktrail Bike Attachment can fit in most any size of bicycle wheels, from 12-inch kiddie rides to large 29-inch grown man bikes.   Just adjust the chalk holder to the appropriate angle and you can commute to work while leaving a trail of colorful chalk scribblings every road you pass through.  It installs easily, too, so kids can quickly hook it up to their two-wheeled rides all on their own.

The chalk, which looks more like a thick and colorful candle than the thing you draw on blackboards with, is made by the company, too.  A single chalk can supposedly last you for up to 1.5 miles of riding.  In case you run out, you can probably bundle a bunch of regular chalks and try to cram them into the slot — maybe wrap them with a piece of cloth so the entire thing holds tight.

Originally a Kickstarter project, the Chalktrail Bike Attachment has been fully funded and should be in production now.  They’ve also reportedly struck a licensing deal with a toy chain, which will sell it on retail before the end of the year.  Suggested retail price is $19.99.