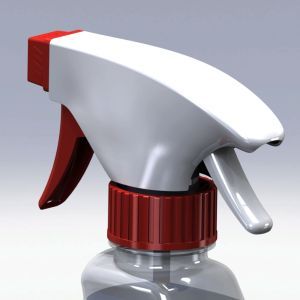 Every household has at least a couple bottles of chemicals that will be unsafe to ingest or put in contact with your skin.  It’s all fine and dandy when you’re living on your own or with a bunch of friends.  When you have kids in the abode, though, it’s a different story, since curious ones could drink off those bottles and mischievous ones could spray each other with toxic crap.  That’s the problem this new Kid-Proof Double-Trigger Spray Bottle seeks to address.

Made by researchers at Nationwide Children’s Hospital and Ohio State University, the redesigned container is claimed to be fully child-proof.  No, it won’t quite scare children with lasers on sight — instead, they simply make it practically impossible for little kids to use the spray. 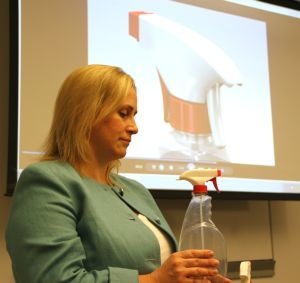 Instead of just one spray trigger, it uses two, requiring people to squeeze both front and rear to send a squirt of that nasty-smelling blue stuff out of the container.  Sure, your kid is smart, so he might be able to figure that out.  However, they sized it so that children’s hands just won’t be able to reach both triggers at the same time.  Even if they do manage to figure out a way to pull it off, the action should require adult-level strength, adding another obstacle in their path.  After each use, the triggers automatically lock, so kids can’t just take the bottle after you and use it comfortably either.

The Double-Trigger Spray Bottle isn’t available yet, as the team is till looking for commercial partners to bring it to market.  In the meantime, though, putting your chemicals inside a locked cabinet should still work just fine.