Chinese Man Reinvents The Wheel With The Multi-Angle-Wheel Bicycle 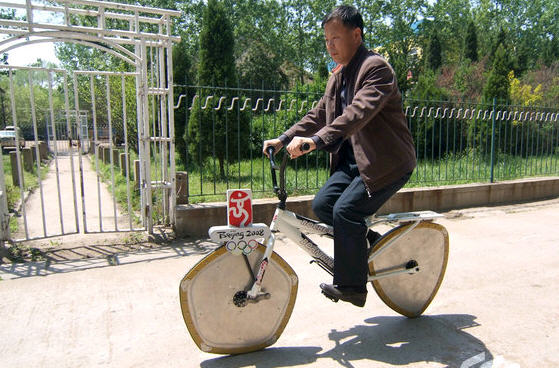 Think round wheels are too normal and boring?  Do what this guy did.  Instead of complaining about it, he decked his bicycle with a front pentagonal wheel and a rear triangular one.  The result is a Multi-Angle-Wheel Bicycle that looks like it came straight out of the Flinstones.

“I just wanted to give people an alternative to normal, boring bikes,”  inventor (really, that’s what we’ll call him now) Guan Baihua told the press.  Instead of running easily along, the irregularly-rolling ride makes pedaling the two-wheeler a difficult proposition – one that can help you shed some serious weight.

Don’t mistake the odd-wheeled bike design to have just sprung out of nowhere, though.  According to Baihua, it took him a year and a half to design the two wheels correctly.  Instead of just an arbitrary decision, they were actually fashioned to work well with each other, providing just enough obstacle to make even a short bike trip a sufficient form of exercise, while not making it impossible to trudge along without losing your balance.

From the looks of it, the Multi-Angle-Wheel Bicycle isn’t all that fun to ride.  Even the guy on the picture doesn’t seem like he’s enjoying it, appearing more concerned about not falling off than anything else.  Still, until we try this, we really can’t say how good it runs.  After all, Fred Flinstone used to ride angled wheels all the time and didn’t look all the worse for wear doing it.  Don’t expect it to hit the market anytime soon (or ever, for that matter).