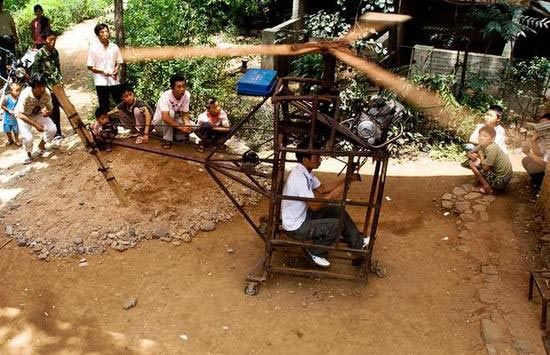 Who says you can’t build a helicopter in your backyard?  A twenty-year old farmer from China sure didn’t believe the naysayers, craftily fashioning one out of chopped wood, steel tubes and a motorcycle engine.

According to Wu Zhongyuan,  he used his mastery of middle school Physics classes, supplemented with information found on the web (which he surfs from his mobile phone, no less), to design the skeletal high-flyer.  While everyone in their right mind will be perturbed at the idea of taking such a flimsy-looking machine taking to flight, Wu is optimistic, claiming that the wooden chopper can get up to as high as 2,600 feet.

The single-seating flyer propels itself with blades made out of Elm tree wood, powered by a 150cc motorcycle engine.  Steel pipes are used throughout the frame for structural rigidity, with wheels that look like they were lifted right out of a pushcart.

Three months was all Wu needed to build the aircraft, which reportedly cost him around $1,600 – an amount I would assume is blood money in a remote mountain village like he lives in.  Hey, Wu, how about handing that web-surfing phone to someone and have yourself shot flying a couple of feet above ground?  From the pics, it looks like your makeshift chopper can’t even manage to take off.  Still cool, though.

Unfortunately, we don’t get to see Wu crash to his death take the Wooden Chopper up for a spin, as the local government forbade him from flying the helicopter for safety reasons.  Personally, I have my doubts about it either, but why not let him risk his own ass trying to hit 2,000 feet?  If he plunges to his demise, that’s one less free-thinker to worry about, right?  I would have assumed the Chinese government will love the idea.