Christmas Truck Wrapped In 3,000 Blinking Lights Looks Awesome At Night, Not So Much In Daylight 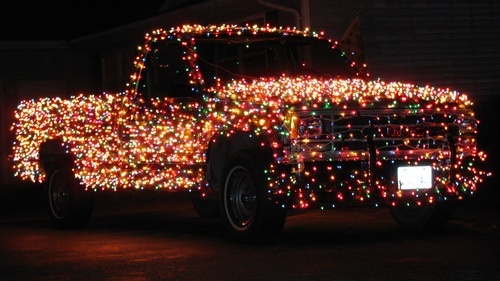 Santa’s sleigh may be the official vehicle for spreading holiday cheer, but the Christmas Truck isn’t all that bad either.  Decked in 3,000 blinking lights, the illuminated pickup has literally brightened December evenings in Central Iowa for the last 25 years.

A seasonal project undertaken by local resident Kris Marshall, the mobile holiday decor is now on its eight generation.  Staying true to tradition, he has used a similar 2WD Chevy/GMC truck (regular cab and 8-foot bed) every single time, partly as a promotion since he also makes his living as a GMC truck salesman. 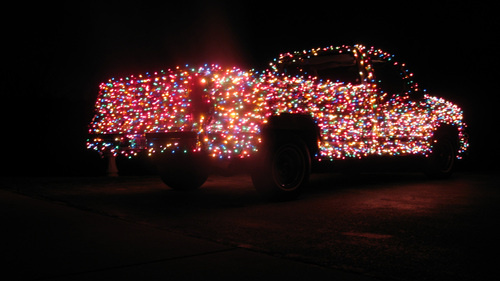 The Christmas Truck is about as low-tech as it can get.  For illumination, it simply uses lines upon lines (between 50 to 70 sets) of Christmas lights attached to the body using electrical tape, powered by a generator hoisted on the cab.  It looks amazing at night and, in fact, has appeared as a part of various parades in the Dallas and Polk County areas over the years.   During daylight, though, it’s a four-wheeled monstrosity of green wires and black tape.

According to Kris, the lights around the car is illegal.  In fact, he’s regularly pulled over by local cops whenever he takes the truck around at night.  After 25 years of appearing during the holidays, though, most officers have gotten used to it, although he continues to get a ticket every now and again.