CineSkates Adds Wheels To GorillaPod, Turns It Into A Dolly 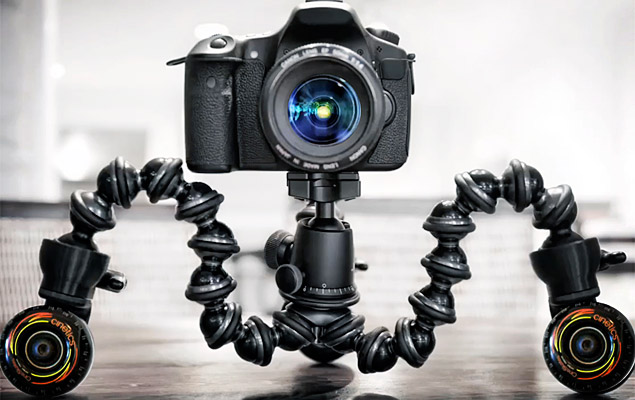 Low-budget film makers (the kind who post their brilliance on YouTube) use dollies, too.  Except their dollies are usually makeshift conveyances like skateboards, carts and other wheeled gear that can be rigged to hold a tripod.   The CineSkates allow you to turn that ultra-flexible GorillaPod into a dolly, eternally simplifying the solution to this low-budget filmmaker’s dilemma.

Designed to work with the GorillaPod Focus tripod, the wheels can quickly attach to the rig, making the whole thing dead simple to execute.  Once installed, the tripod with bendy legs can now be pushed and pulled into any direction, allowing you to capture fluid tracking shots for your next Lady Gaga parody video.

Invented by mechanical engineer Justin Jensen, CineSkates are specially-fashioned wheels for the sole purpose of turning a GorillaPod Focus tripod into a movable camera mount.  To fit the wheels into the ends of a GorillaPod’s legs, you simply screw it in, as its been equipped with a mounting hole sized to fit the Focus’ round feet.  You’ll also need to add a ball head to your tripod to help stabilize the camera during movement.

The CineSkates wheels can be preordered on their own ($150, if you already own a Focus tripod and a ballhead) or as part of a complete set ($275 for the wheels, a GorillaPod Focus and a Ballhead X).  They’re currently gearing up production after exceeding their target funding on Kickstarter.  After this round of preorders, retail price for the full set will jump to $350.