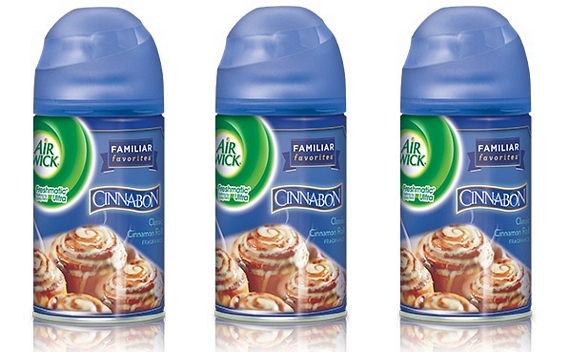 Making a room smell like flowers, fruits, and trees is great and all, but why do that when you can permeate the space with the smell of delicious cinnamon rolls?  At least, that’s the idea behind the Cinnabon Air Freshener, which covers up a room’s natural (or unnatural) odors with the fragrance of the tasty breakfast treat.

Made by Air Wick in partnership with the famous baked goods chain, the air freshener offers a refreshing break from the boring roster of fragrances we’ve been using to cover up nasty smells for the longest time.  Seriously, they all smell like aged cough syrup at this point.  This thing delivers a much needed alternative.

The Cinnabon Air Freshener uses the aroma of Cinabbon’s classic cinammon roll with cream cheese frosting, providing an easy way to bathe your kitchen with the same mouth-watering scents inside one of the chain’s stores.  We don’t know how well it will mix with specific foul odors, although we’d probably recommend skipping its use after a heavy bout in your Kohler Numi Tech Toilet — combining the stink of that place with the aroma of food just doesn’t sound right (excuse me while I throw up).

Granted, air fresheners rarely smell like what they’re supposed to (hence, why they all smell like decade-old medicines), so don’t get your hopes up too high.  Still, even the slight hint of freshly-baked cinnamon delights does sound like an upgrade.  The Air Wick Cinnabon Air Freshener is available from Amazon, priced at $42 for a set of six.