City Lights Globe Shows You The Earth From Your Spaceship 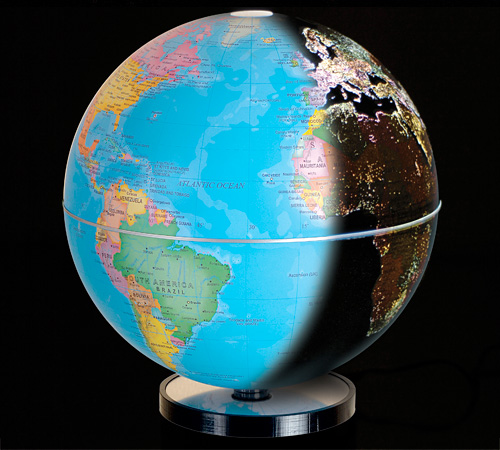 You don’t need the earth’s globe to make your study look serious. That went out of style a decade ago. However, the City Lights Globe comes with some clever tricks that might make you want to reserve a space for it anyway.

Like most any globe you can find, it’s got the world map nicely printed on a circular ball representing the planet, with color-coded bodies of land and water adorning its body. It revolves automatically on its axis too, in perfect tune with the earth’s slow movement in space.

The 6-inch diameter City Lights Globe, however, does every globe you’ve seen one better. Once placed on its 5.5-inch mirror base, it shines light on areas where there’s daylight and leaves the rest in darkness. Even cooler, all the different cities of the world are lit from behind, so you can see the different masses of land highlighted at night. With all the lights off, the whole thing looks like it’s floating on air, with only the equator and small lights from the world’s cities visible to whoever’s watching. Talk about spectacular. 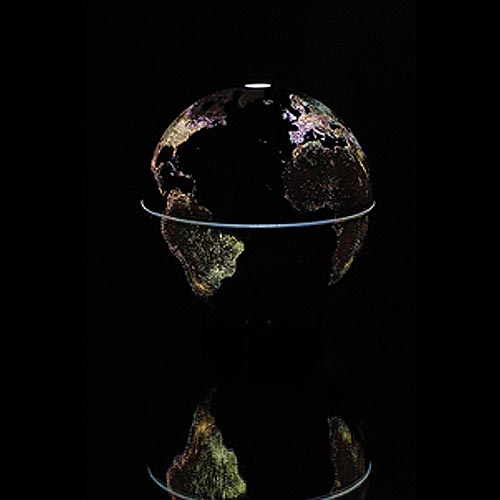 If you ever wanted to sit in the hull of an alien spaceship, looking down at that strange little planet that invented the Kardashian sisters, this is how it will look like. In fact, that’s probably the same exact thing you saw when your parents brought you here from Pluto (but you were too young to remember). You do know you’re really from the far end of the Solar System, right?  That, in fact, is why you were so angry when these stupid Earth scientists declared that Pluto is not a planet. Your home is just a dwarf planet. Ha-ha.

While you probably won’t have any real use for a globe (Google Maps is your best friend), the City Lights Globe isn’t supposed to help you understand geography. Rather, it’s supposed to be the most awesome thing in your study. And it will be. Price is good, too, at $49.95.