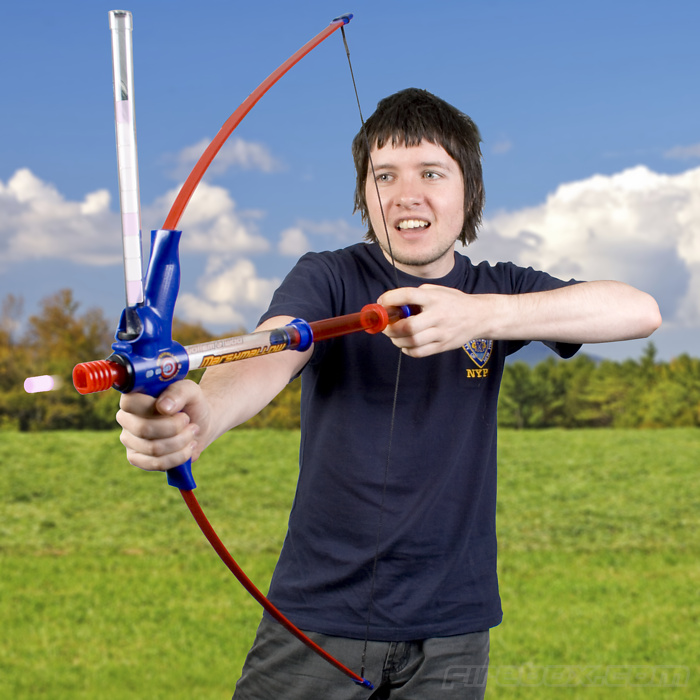 Nerf guns are fun.  But why hit people with foam darts when you can smash them with marshmallows?  Ruminate on that, experience a sudden moment of clarity and get yourself one of these: the Classic Bow and Mallow.

Oh, you already have a marshmallow-shooting gun?  Well, that’s awesome, but this is a mallow-firing projectile weapon clad in the traditional bow and arrow design.  We guess a gun is cool if you fancy yourself a Punisher-type fellow.  Those who identify more with Hawkeye or Robin Hood, though, will probably want to switch with this sweeter-looking sugary treat dispenser.

The Classic Bow and Mallow measures 86.4  x 35.6 cm when fully assembled (takes around 5 minutes to put together), making for one ample-sized weapon bound to strike fear in the hearts of your co-workers.   Since loading one projectile at a time isn’t really the norm these days, they designed it with a tubular magazine that holds 25 mini-marshmallows, allowing you to pelt your enemies with a torrent of the sugary confection.

The bow can shoot mallows at a range of up to 30 feet, making it easy to hide behind a cubicle wall while executing your attack.  When taken apart for storage, it doesn’t even look like a bow and arrow assembly.    That means, you can keep it out in the open without your cubicle neighbors developing any suspicion about your plan of assaulting them during lunch break.

Firebox has the Classic Bow and Mallow for pre-order, priced at £22.99.  We don’t think it comes with marshmallows of its own, so better stock up on the mini variety if you’re planning to get one.