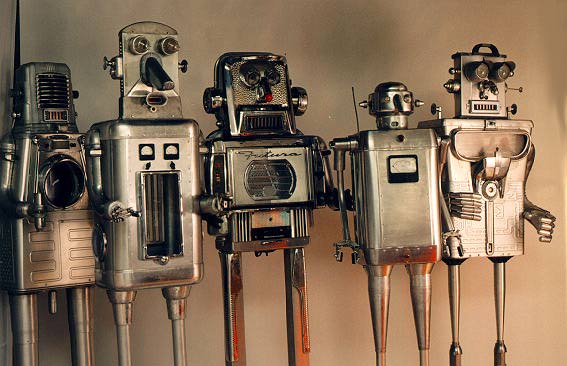 As much as I am in awe of all the new robots we chance upon these days, I really hope our future android  creations look more like steel and aluminum mascots.  Even when laden with scary abilities, they’ll at least come across as goofy cartoon sidekicks, instead of threatening Terminators and Robocops.  More specifically, I’d like them to look like Clayton Bailey’s robot sculptures, whose life-size bodies resemble a mix of silly cartoons, junk art and a future that looks like a lot of fun.

Even if you haven’t heard of Clayton before, you may have come across various pieces of his work, many of which have been posted online in one form or another.  A Professor Emeritus of Ceramics at California State University, the prolific artist boasts a body of work that range from ceramic art to ray guns, not to mention his impressive collection of inanimate robots. 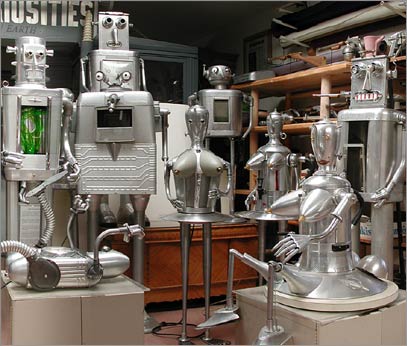 Bailey’s robots are carefully sculpted out of flea market fare, discarded home appliances and scrap automobile parts.  To date, he’s made over 100 life-size robot sculptures since 1976.  The first of the line was On/Off, The Wonder Robot, a wearable robot armor that the artist donned himself as a promotion for his Wonders Of The World Museum.  According to the stories, he would go out in costume to chase tourists and children right to the museum’s doors. 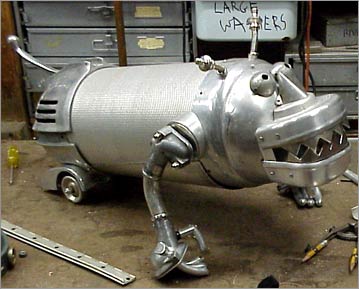 Other prominent characters from his life-sized collection include the controversial Marilyn Monrobot (a sexpot robot with a teapot head and hanging tits), Lava Robot (a robot with a functional lava lamp on its chest) and Robot Dog (an ugly half-dog, half hippopotamus robot that barks).  A number of Clayton Bailey’s robots, along with other pieces, are still available for sale directly from the artist’s site.