CoBi-7 Conference Bike Lets You Hit The Road While Socializing 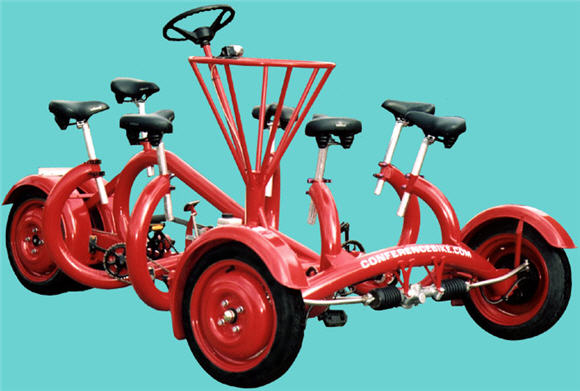 Apparently available since the mid-nineties, the Conference Bike (officially called the CoBi-7) is easily one of the oddest pedal-pushing contraptions I’ve seen.  If you thought having two people share the load on a Tandem Bike was rad, then you’ll realize how crappy that is when this “group” bike rolls in front of you with over half a dozen bodies propelling it.

Fitted with seven seats and seven sets of pedals arranged in a circle, each person’s pedalling contributes to the bike’s overall push.  Do note that only one of the seven (the guy in the furthermost seat) can drive and trigger the brakes, since letting everyone steer the thing is only likely to end in disaster. 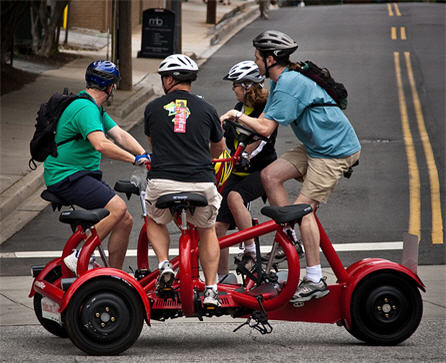 Originally designed in the mid-nineties by American artist and inventor Eric Staller, the Conference Bike is actually a tricycle that runs on four wheels (I know, you’re confused too).  It’s a trike that’s called a “bike” that uses two front wheels and a rear unit that’s actually two wheels slapped together.  Hah.

The CoBi-7 isn’t the kind of bike you’ll likely be riding for your daily commute, but it does offer one distinct advantage other vehicles don’t.  The seating configuration (seven people in a circle) makes for an excellent way to socialize while on the road, which is why it’s often used as a tour bike or as an official prop in team building retreats.

Driving it is actually more car-like, using a Porsche-style front steering system that the official website claims offers more stability at high driving speeds (with seven people all pushing the pace, I imagine it can go pretty fast).  Don’t think you’ll be flying on this thing, though, as it’s pulling a hefty 400 lbs (apart from the combined weight of seven cheeseburger-fed folks).  It comes with two independent hydraulic brake systems – one via hand lever and another via foot pedal.

I’m not sure about pricing, but the CoBi-7, along with other crazy Conference Bikes, is available for sale with a two-year warranty.  You may have to get in touch with them to get an exact quote.