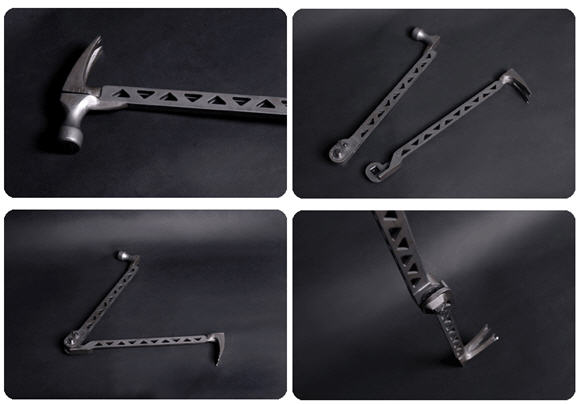 You had me at “demolition tool.”  Anything that’s meant to demolish is always fine by me.  More so if it brings six other functions to the table.

The Cole-Bar Hammer is a new multi-purpose tool that claims to be able to perform seven different capabilities.  It features a two-piece design, with a ratchet that locks at any angle from 0 to 180 degrees, facilitating a good range of uses.

According to the product page, the versatile construction tool can be used as a hammer, a crowbar, a square, a socket wrench, a cat’s paw, an angled ruler and a demolition tool (damn, no beer bottle opener).  It’s basically a hammer that can be split vertically, making way for the multitude of other talents.  Because of the changeable functions, it lets you take to your DIY tasks with a tad fewer implements in your toolbox.

Named to honor Cole Norman Hyde, the inventor’s late son, the Cole-Bar Hammer is among this year’s participants in the Cool Tools Inventor’s Challenge.   The show airs Thanksgiving Weekend, so you may want to give it a look to see how it fares among other nifty creations.

You can see it in action in the video below.  That’s supposed to be a near-production model, so it’s likely how the tool is going to look like if it ever hits store shelves.   Looks mighty slick to me.