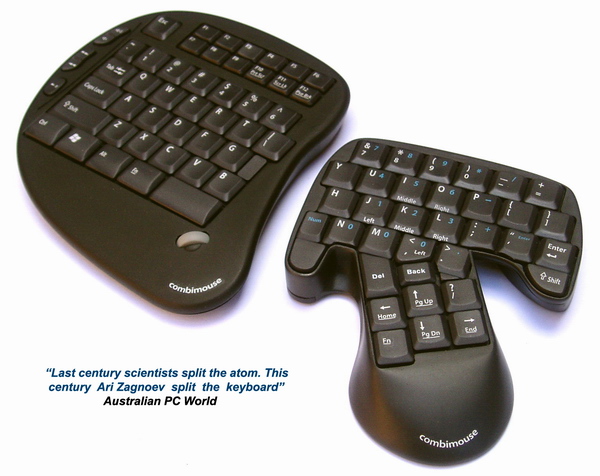 I used to have a really small computer table and it wasn’t uncommon to encounter problems fitting both mouse and keyboard on the single pull-out desk.  As such, I had to make do with a smaller-than-usual set of keys, just so I can work the other peripheral in. I’ve since upgraded to a better workspace, but I’m pretty sure there are others still in the same boat, who can probably appreciate the Combimouse.  A split ergonomic keyboard, it uses one half of the QWERTY panel as a modified mouse, allowing space-challenged users to get rid of that other device that controls the cursors so they can click on stuff.

One half of the Combimouse (the left part) is designed to stay still, while the right part is afforded some mobility.  If you hold it like you would handle a mouse (gripping the sides), it recognizes the stance and performs as such, controlling the onscreen cursor like PC-plugged rodents are supposed to do.  Move your right hand into any other position, though, and it plays as the other half of the keyboard, allowing you to type away to your heart’s content.

During mouse mode, six of the keys (I, O, J, K, L and <) on the Combimouse become mouse controls, each with their own equivalent function (e.g. left click, right click,  etc).  Moved across the surface, it behaves like a regular mouse would, controlling onscreen actions.

Unfortunately for left-handers, the Combimouse has been designed specifically with righties in mind.  As such, only the right split is endowed with special powers.  Bad news, too, for right-handers who think it will be useful – the thing is not even available yet.  In fact, it might not even be built, as the creator is still looking for investors to put money into its manufacturing.  Even worse news for the Combimouse, which will probably never be made.   Let’s face it:  as cool as that split peripheral is, there are probably easier solutions to space problems than employing another (likely expensive) accessory that will foster a serious learning curve.