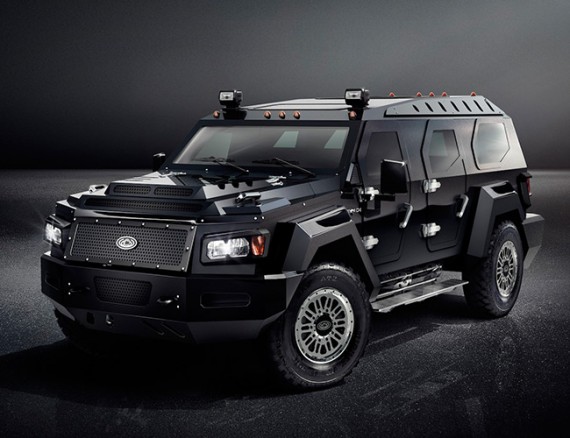 What’s the point of buying a large, rugged vehicle if it doesn’t look like it can monster truck its way over every other car in sight?   That’s not a problem with the Conquest Evade, a scary-looking SUV that should put even the gnarliest Hummers to shame.

The follow-up to Conquest Vehicle’s fully-armored Knight XV, the new ride should be just as capable a battle ride, although it sheds some of the armor in favor of a lighter weight.  For that trade-off, you get a considerably faster vehicle that should help you get out of sticky situations quicker, whether you’re dealing with an alien army chasing after you or a cast of post-apocalypse bandits intent on stealing all your supplies.

While the product page bills the Conquest Evade as “elegant, intelligent and utilitarian,” I really can’t picture the first of those qualities applying to this thing.  Maybe it’s an autocorrect mistake and they actually meant to type “brutish.”  Yeah, that has to be it.  Seriously, that Hyundai Zombie Attack Car they showed off at Comic-Con has nothing on this beast.

Definitely more aggro than the most aggro-looking SUV on your block, the 4×4 is based on a Ford F-550 Super Duty chassis, which is decked in panels made from an aluminum and steel blend, providing both lightness and toughness.  Features include a huge cabin (400 cubic feet of space), 2+2 limo-style seating, touchscreen dashboard controls, three tandem sunroofs, 360-degree roof mounted searchlights and a stainless steering wheel.  Of course, there are plenty of upgrade options, including FLIR night vision cameras, retractable TV panels and executive-style reclining seats.