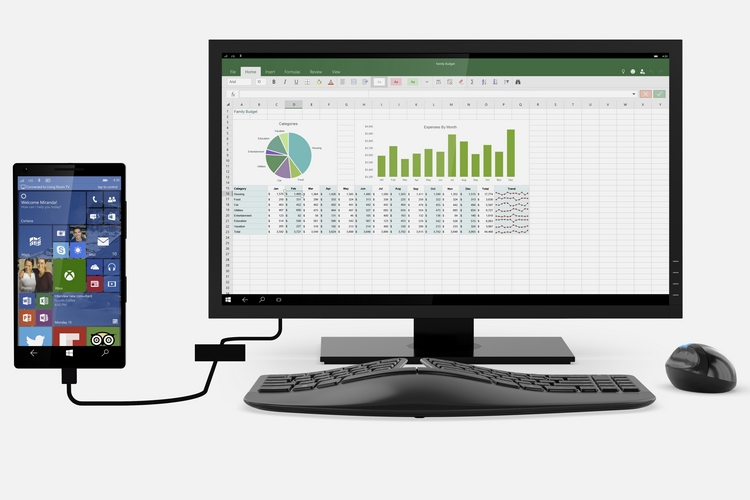 We’ve seen a few efforts to turn phones into tiny desktop machines, the most promising of which is the Andromium, which was recently released on Google Play. With the upcoming release of Windows 10, you won’t need a third-party app, as it comes with a feature called Continuum for Phones, which turns a smartphone into a mini-desktop whenever it’s plugged into a large display.

As soon as a Windows 10 phone is connected to a monitor, mouse, and keyboard, the system will immediately adapt the UI into a desktop-friendlier layout. Seriously, the UI suddenly gains a Start Menu and Task Bar, with the apps (at least, the native Windows titles) following suit, looking like the way they do now on your Windows machine.

Do note, for Continuum to work on individual apps, they will need to have been built to scale in a desktop form factor, so developers will need to work on their end to make it happen. Microsoft is providing all the necessary tools, though, which makes it a no-brainer for anyone developing for the Windows 10 ecosystem. Bad news is, the feature won’t work with existing Windows phones (even if they get an upgrade to the new OS), as it requires the use of new processors that support the dual-screen capability.

Seriously, being able to leave your laptop at home and just plugging in your phone to a monitor at work does seem like a heck of a convenience. Obviously, phone hardware will need to get better if this feature is going to cross over into more demanding applications, but the possibilities it opens are definitely exciting.

Check out the video below to learn more about Continuum for Phones.