Cook Your Pizza On A BBQ Grill 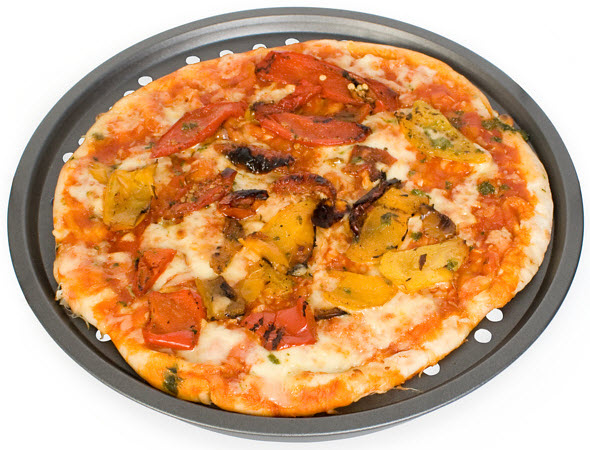 Your portable grill is a lifesaver on the camping trail.  All the splendor of the outdoors and none of the crappy food.  You know what will make it better, though?  Pizza.  And that’s exactly what the BBQ Pizza Pan brings you.

Yes, it really cooks pizza (or, at least, a close approximate).  Instead of just lacing your round crust with oak-smoked sliced pork and sauce-drenched vegetables, you literally cook the grub over the grill.  We don’t know how it tastes nor how it manages to pull it off, but we’re impressed all the same.  And hungry — that thing looks good.

The BBQ Pizza Pan is a two-piece cooking set consisting of a perforated tray and a  pan.  When cooking pizza, you put the crust face up on the tray and set that on the grill, with the pan covering  it.  According to the product page, doing that will keep the round deliciousness from falling in the flames, while letting air out to the underside — making for a piping hot pizza with a crispy base.  Just add bacon hot sauce and it’s a go.

Both the tray and pan are coated with teflon, measuring 32. 8 (d) x 0.9 cm. and  32 x 3.9 cm. respectively.   The latter can also double as a regular cooking pan, so you can take a break from a steady diet of pizza and grilled hotdogs, whipping up an omelet or paella when you feel like it.