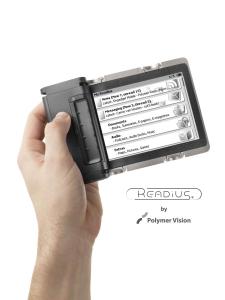 There seem to be two major issues with any ebook reader (the Kindle, Sony’s Reader, etc.).  Either the screen is really too small, or the screen is too big.  If it’s too small, you squint and have to scroll constantly.  If it’s too large, the entire device is bulky and hard to carry.  However, Polymer Vision has created an ebook reader prototype that may be solve this issue: the Readius features a very cool roll-up display that unrolls to be larger than the actual device!  However, there’s one major problem: the company is facing bankruptcy and has already missed their projected launch date for the Readius.  It had an early 2009 release date, but as that date grew closer, no news about the Readius was heard.

The Readius was first announced way back in July 2008, but few people knew about it.  The tiny prototype devices were small enough to fit into a pants pocket and were around the size of a cell phone.  However, all you had to do was press a button and the display rolled out.  It was about five inches long when completely unrolled.  So far, the Readius is the only device, prototype or not, that features such a cool roll-out screen.  The black and white display was developed in conjunction with E Ink, the company that actually makes displays for the majority of the ebook readers.

In addition to the innovative screen, the Readius includes 3.5-G wireless connectivity and, for extra storage space, a MicroSD card slot.  While the product is now on permanent hold while Polymer Vision seeks alternative funding, we can only hope it will someday see release.