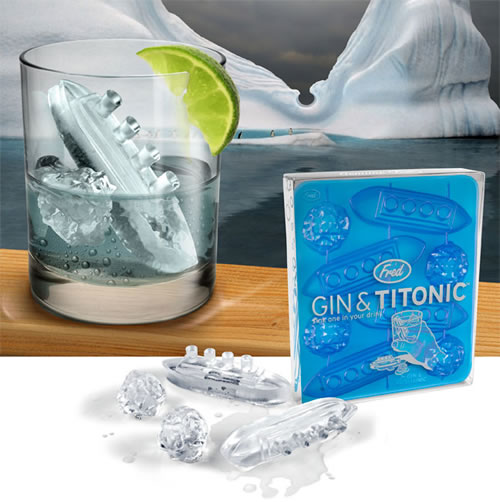 Ice cubes are, quite frankly, boring.  Sure, you can choose between squares and rectangles, but really, that’s about it.  Until now, that is.  Today, ice cube trays come in a ton of different shapes and sizes.  In addition to getting slightly different shapes like hearts, stars, and moons, you can find some very unique ice cube trays if you know where to look for them.

One of the neatest trays is the titanic ice tray.  Pour some water into the tray, stick it in the freezer, and in a few hours, you have four frozen ocean liners and four dangerous icebergs for your glass.  These ice cubes are very popular in the “gin and titonic,” a gin and tonic that features the famous sunken ship.

Video gamers always need their caffeine, and to keep their beverages cold, there’s the ice invaders ice cube tray.  This tray recreates some of the little alien ships from games like the classic Atari game Space Invaders.  This tray makes 24 alien ships that will help gamers battle the forces of evil and keep their sodas chilled.

Want to add a bit of fun to your kid’s drinks?  How about sending them on a fossil dig?  The focalized dinosaur ice cube tray set includes two trays—one for cubes that create a triceratops and one that makes the bones of a tyrannosaurus rex.  These trays are great for a dinosaur-themes birthday party or for kids who just love dinosaurs.  They can even double as Jell-O molds.

Finally, the frozen smiles tray created a set of frozen teeth that, well, is surely perfect for something (perhaps a Halloween drink?).  Either way, just don’t confuse it with the glass holding your grandfather’s false teeth!