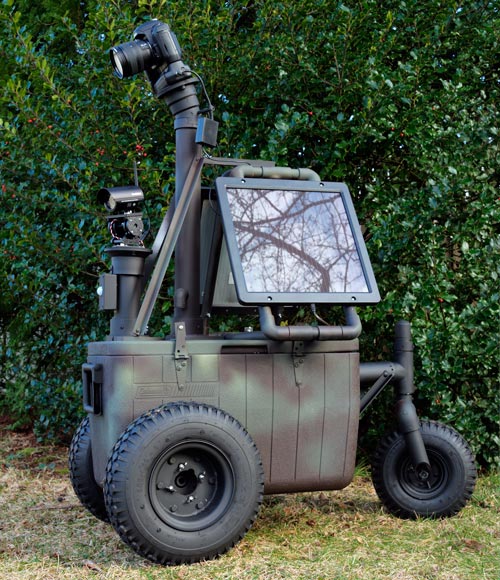 Robot hobbyist Steve Norris  named this the CoolerBot , but its functions have nothing to do with either lowering the temperature or being cooler than every other robot on the block.  Instead, the telepresence droid is like an armored papparazi, taking wildlife photos all on its own (with your help from afar, of course).

Why a robot?  Because humans scare animals.  And humans can’t keep looking inside a peephole while standing outdoors for extra long periods of time.  While this robot looks more scary than humans (not sure how it looks like to animals, though), it should be able to lie in wait without having to stretch its legs or pee or get hungry. 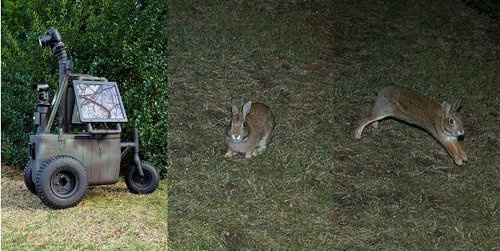 Designed to sit outdoors for extended durations, the photograph-snapping CoolerBot sports rugged build (durable body, waterproof electronics) and can self-recharge its pair of 12-volt SLA batteries via solar power.  It uses a tail-dragger configuration that lets it move both forwards and backwards, using 14-inch front wheels and a sole 10-inch caster in the rear.  Two Parallax HB-25s drive the dual NPC-41250 motors, with the entire thing accessible from a distance via a 912MHz transceiver.

Whether you’re angling for shots of lions butchering deers, teenage couples cavorting in the woods or that oh-so-rare sighting of Bigfoot, the CoolerBot should help you nail those precious scenes with its onboard infrared video recorder and Nikon digital SLR camera.   Best of all, you can do it without having to get up from the confines of your comfy trailer.

Even though creator Steve claims it’s really for photography, I’d be wary if I see this anywhere nearby.  The thing looks like it’s packing a lot more than optical equipment.  In fact, I wouldn’t be surprised if an armalite pops out of there and begins shooting Bugs Bunny’s cousins right on the spot.  Rabbit stew…mmmm….