Corn Kerneler Will Free Your Sweet Corn From Its Cob 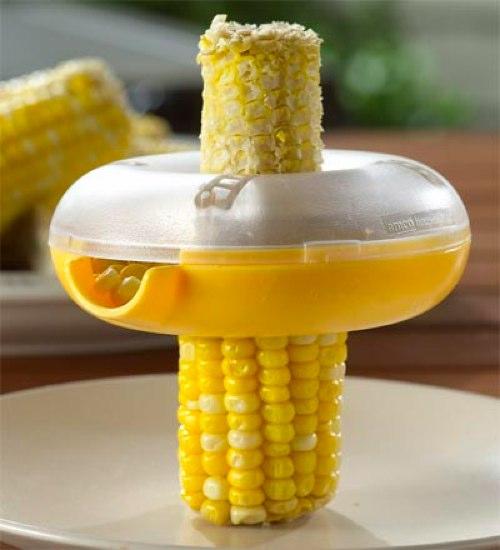 Corn is good.  But that damn cob makes everything so difficult.  Fortunately, you won’t have to deal with the mess of gobbling from the cob when you’ve got a Corn Kerneler.

Clad in the shape of a donut, you simply put the contraption’s central hole over the narrow end of the cob.  Then, push it down in one swift motion and watch the interior blades leave that inedible trunk clear of all those delicious round kernels.   Toss the cob, dump the seeds into a bowl teeming with butter and you’re done.  On to the next.

The Corn Kerneler measures 5 inches long and 2 inches deep, with basin space for up to two ears’ worth of kernels.  Stainless steel blades installed right along the center slices all the seeds off the cob, which are collected neatly in the plastic tool’s basin.  A mouth on the side lets you pour out the kernels without having to open the see-thru lid.

Basically, the thing works like a circular knife, stripping the kernels all around the cob instead of one side at a time.  That means, you won’t just be eating with less mess, you can prepare the kernels faster and more efficiently, too.

Plow and Hearth has the Corn Kerneler available now, priced at $12.95.

[Plow and Hearth via TheAwesomer]