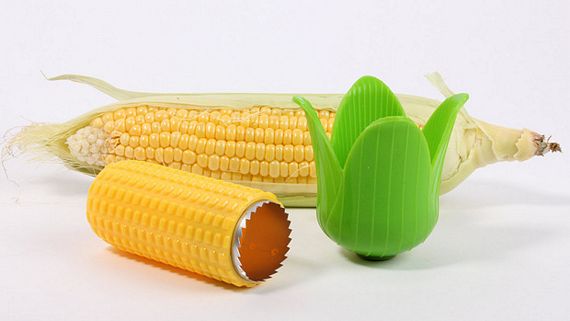 As much as we like torturing our teeth picking corn off the cob, we really prefer  just taking a spoonful of fresh corn off a bowl and shoving them in our mouths.  Life is so much easier that way.  While shaving off kernels with your freshly-sharpened Pearce Knife or Corn Kerneler can definitely work, the Corn Twister just seems like a simpler, mess-free alternative.

Made by Swiss kitchenware company Kuhn Rikon, it’s a simple bladed contraption that lets you cut kernels off the cob easily and cleanly.   Just slot the corn into the hole, twist it while standing over a bowl, and watch the kernels drop off one by one.   Granted, it doesn’t look half as cool as slicing kernel off with a jungle knife, but we’re sure your fingers will thank you for all the potential accidents they’ve been spared from. 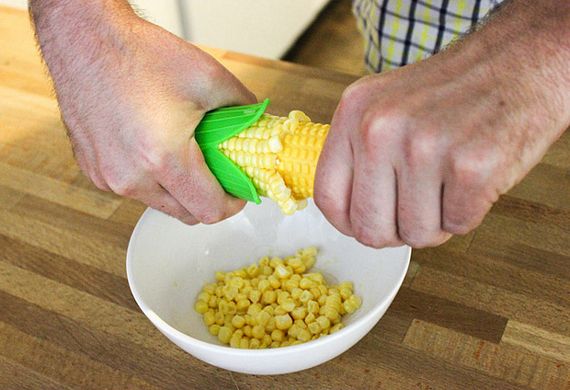 The Kuhn Rikon Corn Twister is made up of two components: a bladed cylindrical cutter that’s shaped like a corncob and a green silicone husk that’s meant to act as a stable handle grip.  To use, put the silicone husk over the closed end of the bladed corn cutter and insert the corn into the plastic using a twisting motion.  As you twist, the kernels will be sliced off by the blades at the opening, with the empty part of the cob pushing inside the cylinder.  The cutter’s compartment is about half the length of a standard corncob, so just flip the corn over to pick off kernels on the other end.  Catch is, the opening on the bladed cutter is only 4 inches in diameter, so it won’t work with chubbier corn cobs — you need to buy ones slim enough to fit.