Crafthouse Creates Articulated Hands For Your Hobby Robots, Must Handle With Care 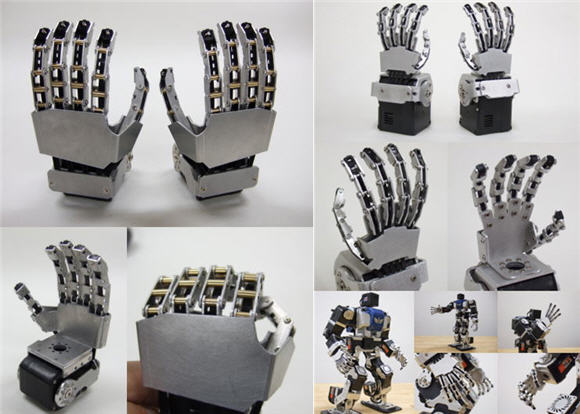 Toy robots are pretty amazing.  However, I don’t think we’ve ever seen ones sporting really articulate hands, with off-the-shelf units largely consisting of grippers or some other less-complex substitute.  Japanese hobby robot supplier Crafthouse is about to change all that, putting out two different sets of robot hands that masterfully function like real human appendages.

The top-of-the-line God Hands is easily the most notable, consisting of two five-digit robot hands with plenty of articulation points.   Because they’re so small and intricate, each piece is made by hand and are assembled only upon order (you’ll need to wait a minimum of one month to get yours).   Unfortunately, the God Hands don’t offer God-like omnipotence and are, in fact, highly fragile.  According to Crafthouse, they can easily be damaged if a robot falls on them.  As such, they come with no guarantees.  Frail construction notwithstanding, there’s just nothing else like them.

A cheaper, larger and more mass-produced version is also available.  Called the Melissa Hand Type-1, they also feature a full five fingers on each hand, along with plenty of articulation.  Designed for hobby robots about 50 cm in size, they should prove sturdier than the God Hands, although Crafthouse still warns against using them in robot battles.

Both models are operated using Kondo KRS-4014SHV servo motors.  You’ll need to buy two per set, as each can only control five fingers at a time.  From what I can tell, movement will still be pretty limited, consisting largely of opening and closing motions.  That means, your hobby robot still can’t give me the finger, while I can completely flip its master anytime I want to.