Craigerator Fire And Ice: Even Kegerators Work Best With An iPod 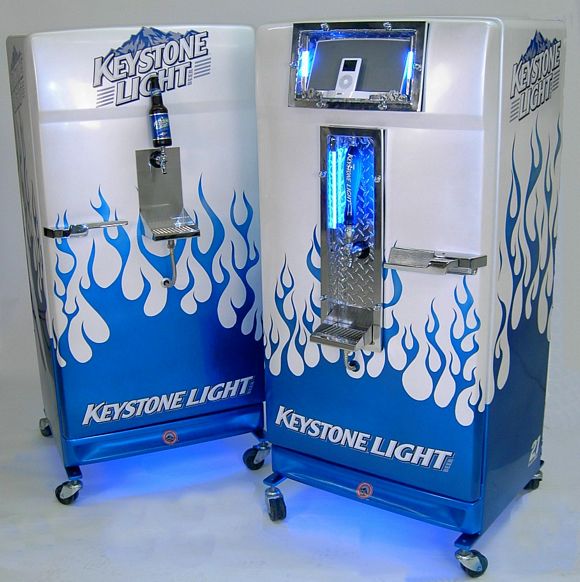 Food always tastes better with ketchup.  All pieces of home electronics and furnishings, on the other hand, simply work better with an iPod.  Even kegerators.  If you have any doubts, just take a gander at the Craigerator Fire and Ice, a custom, one-off kegerator with an integrated iPod dock and speaker system.

Commissioned by Keystone Light Beer, the “made for iPod” beer dispenser (the second one in the picture) was given away as part of the grand prize for FHM Magazine’s Pimp My Pad contest.  Just as the description suggests, the full-size kegerator serves as much beer and music as your manhood can handle.

To produce the Fire and Ice, creator Craig Jones stripped an old fridge apart, putting it through various processing stages, including sandblasting, powder coating and repainting.  The finished set includes a new compressor, updated environmental freon and high-density foam insulation.  For the snazzy appearance, he threw in custom-fabricated pieces, flame paints, diamond platings behind the doors and neon panels in various locations.  Of course, it comes with a 15.5-gallon beer keg inside, connected to a tap dispenser.

Around the top of the door lies a Bose speaker with an integrated iPod dock.  The system is tied to the neon lights via a music interface, which turns the machine into one big disco fridge while it’s pumping sounds.  Simply put, it makes for the perfect cheesy bachelor pad centerpiece – loud, obnoxious and shameless.

Craig won’t release details on the price, but he says it costs around the same cash as most people spend on a brand new car.  That’s good news, because it means you can probably afford one if you walk to work instead.