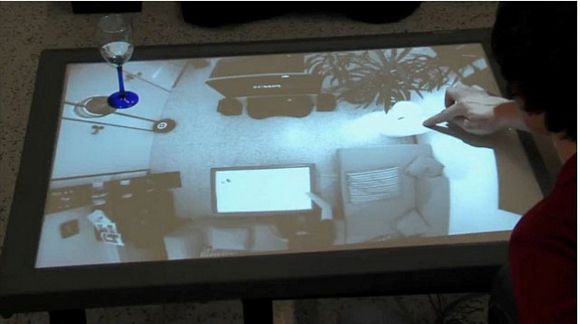 While designing coffee tables has, generally, been the realm of artistic types, a new contraption might totally change its function in future homes. Instead of being the default surface to set your drinks (and your stinky feet) on, CRISTAL turns it into a universal remote control for your entire living room.

The acronym stands for “Control of Remotely Interfaced Systems using Touch-based Actions in living Spaces,” a convoluted name for what’s essentially a coffee table that functions as a central control panel for your living room’s electronic components. Developed by students at the Upper Austria University of Applied Sciences, the tabletop machine turns the function of universal remote controls into a visual activity, making them much easier than the currently daunting mass of buttons and programming that handheld models require.

With an interface that’s reminiscent of Microsoft’s Surface computer (in a scaled-back implementation), CRISTAL involves two main hardware components. Apart from the touchscreen coffee table, it uses a ceiling-mounted camera that takes an overhead capture of the living room in real time. The images taken by the camera are fed into the tabletop computer, where users then control particular devices by simply tapping on them.

Tap on the TV and slide your finger across the screen to lower its volume, for instance. Bring up the media list on your networked storage, find a title that you like and drag it to the TV to load a movie. More than just media devices, though, you can control every piece of connected hardware in the room, including the vacuum (as you can see from the demo video below). Using the system, you can turn off the HD radio, dim the lights, put on a playlist and control every aspect of your environment in a rich visual manner.

As you may have guessed, CRISTAL isn’t the kind of system you can get off the shelves right now. At the current configuration, it is estimated to cost around $15,000 – not the easiest way to push a new piece of technology to consumers. However, it’s creators are looking towards the future and imagine that a similar system might become a plausible addition to homes within the next five to ten years.