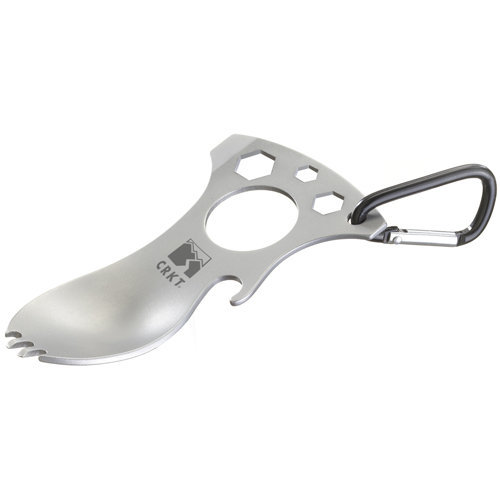 Do you like eating your dinner with grease, mud and random debris?   That’s exactly how you’ll live it up with the Eat’N Tool, a suspiciously-designed multi-tool that pairs various DIY fixing functions with an eating utensil.

Created by Columbia River Knife & Tool (CRKT), the unusual combination is the brainchild of  Liong Mah.  We’re not sure if he even considered the messed-up logistics of pairing wrenches with a spork in a single slab, but that’s what you get here and it’s awesome.

Like we said, the CRKT Eat’N Tool has a spork (spoon/fork combo), along with three metric wrench reliefs (10 mm, 8 mm and 6 mm).  There’s also a bottle opener, a screwdriver blade and a pry for opening canisters.  A carabiner is attached to one corner, while a big hole in the middle lets stick your finger in for easier use, whether you’re tightening the screws on the grill or stuffing your face with mashed potato.

The entire slab weighs a light 1.5 ounces, making it easy to tack on to a belt loop and ignore till needed.  It’s available in two makes: one with a bead-blast finish (9100C) and another with a black non-stick coating to make cleaning off the crappy food you eat much easier (9100KC).