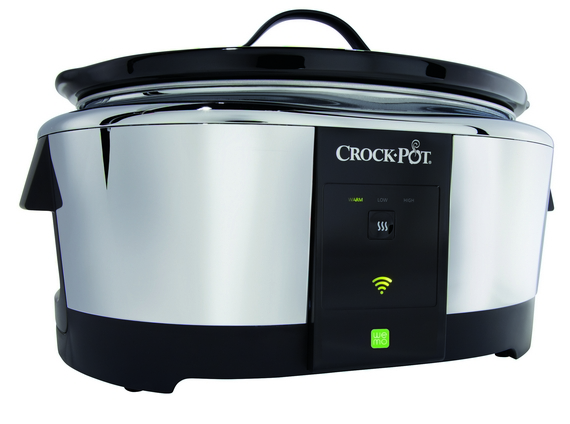 Slow cookers (and pseudo-slow-cookers) are awesome, letting you cook food with the most intense flavors, all while requiring minimal kitchen skills. It’s like the appliance version of MSG. And while programmable slow cookers have already solved the problem of irregular work and social schedules messing up your dinner plans (e.g. you come home to pot roast falling apart like hashed meat after having to do 4 hours overtime at work), it still would be fun to be able to just shut the entire thing down when you realize at 3PM you aren’t coming home to dinner anyway. Well, now you can with the Crock-Pot Wemo Smart Slow Cooker.

Like other slow cookers, it’s a simple cooking contraption that lets you cook chilis, stews, and other dishes under three relatively low heat settings. Unlike them though, it wirelessly connects to your home network allowing you to control the darn thing from practically anywhere, provided your phone can get online.

Paired with an app (available on Android and iOS), the Crock-Pot Wemo Smart Slow Cooker can be managed remotely, allowing you to adjust cooking temperatures (e.g. you can start it at high before leaving home, then turn it to low while at the office an hour later), set timers (e.g. have it cook for only 7 hours when your office buddy tells you 10 hours will make the sauce too tangy), and control power (e.g. shut it off when the boss announces he’s buying everyone dinner tonight) away from home. The app also comes with calculators that let you compute optimal time lengths and cooking temperatures depending on the dish you’re making. While the functionality isn’t really revolutionary, having remote powers over your slow cooker will probably be much appreciated, especially among the single crowd who keep highly irregular schedules.

Price for the Crock-Pot Wemo Smart Slow Cooker is set at $99.99.