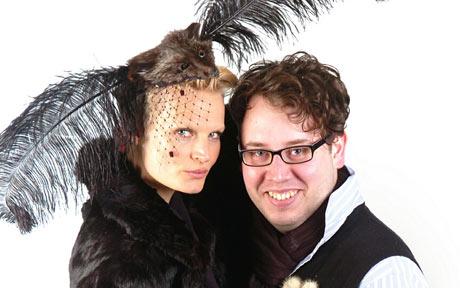 You have to admit: fur looks gorgeous. If you can’t stand the thought of all those animals put to rest just so you can wear former living things on your body, though, James Faulkner might have the perfect compromise. His new line of headgear laced with heavy fur and feather uses materials salvaged entirely from roadkill. Very humane.

According to James, he first caught wind of the idea when he stumbled upon a dead magpie on the side of the road. Instead of cringing at the sight of the dead crow, all he could think of was how good its feathers would look on a wedding hat he was making for a friend. So he picked it up with a plastic bag and took it home. Later, he sawed off the wing using an axe, took out the feathers and constructed his very first roadkill creation. Little did he know it will be the progenitor of many.

The designer, who is graduating from an 18-week milliners course at Edinburgh’s Telford College, currently has 36 hats in his line, each one made using the feathers and furs of found dead animals. His sources include foxes, magpies, rabbits, wood pigeons, pheasants, mallards, crows and peacocks. The collection will be showcased alongside other students’ work this coming May.

“I feel like I am turning something sad into something quite stylish,” the designer notes. While I can’t argue about the “stylish” part till I see the line, he does turn something very sad (roadkill) into something potentially useful, which is quite commendable. Faulkner himself does all the skinning and plucking, which he follows up by scraping all the fat off and treating the found materials with a salt solution.

While he’s still finishing school, James says the demand for the “roadkill hats” are snowballing and he is looking at setting up shop as soon as he is able to.