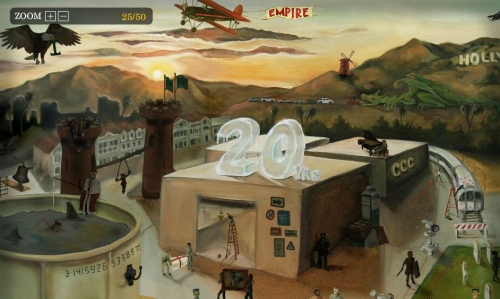 Empire Magazine is celebrating their 20th year anniversary and, among other things, created a “Where’s Waldo”-type game made to commemorate the occasion.  Called the Cryptic Canvas, it involves a painting with 50 visual puns on their favorite films of the last two decades – find the clues, identify the movies and don’t win a prize.  Yes, it’s just a fun time-waster if you’re into cinemas and such.

Basically, you’ll have to look at the painting and find images that correspond to a movie.  When you guess a title right, the text box turns green and the particular image dims. The clues aren’t that hard, as long as you’ve carefully paid attention to the last 20 years of cinema.    If you’re like me, who pretty much didn’t care, I reckon your score will be near the same paltry 11 answers I got correct.

To play, simply click on any image in the canvas and type the title that corresponds to it.  The game ends once you get all 50.  Since I was never going to finish it anyway (given that I never even knew half those movies), I cheated and looked at answers people have posted online.  Some of the references are pretty inane, a few are too obvious while others are quite fun to find out about.

Empire will likely keep the Cryptic Canvas up at their site at least for at least a couple of months, so there’s no rush to guess all 50.  You can continue the game later if you can’t complete it in one sitting.