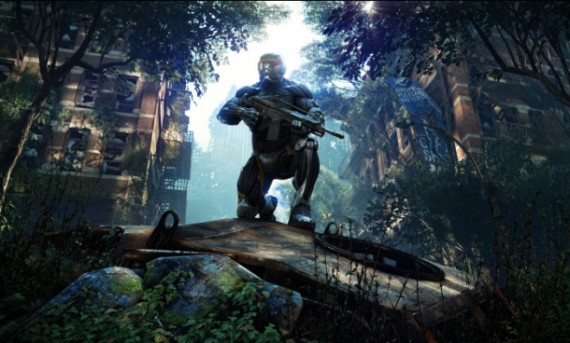 I can’t wait for the future.  Traveling around town in self-piloting jetpacks while you sleep on the way to work.  Getting lapdances from tentacled alien exotic dancers in the strip club.  And fighting evil armies in an urban jungle while wearing a nanosuit.  Since that future is likely a long time coming (maybe even never), I guess I’ll just wait for Crysis 3.

No, we don’t think self-piloting jetpacks or tentacled alien exotic dancers are necessarily going to be in the game (yes, it will be awesome if they did),  But donning a nanosuit and superheroing around a post-apocalypse city jungle is definitely on the table.  And that’s a heck loads of fun.

Crysis 3, which takes place in 2047, sees protagonist Prophet back in New York, which has now been sealed inside a dome under the control of the nefarious Cell Corporation.  Of course, it isn’t the New York you know.  Instead, the city has evolved into an “urban rainforest teeming with overgrown trees, dense swamplands and raging rivers,” split into seven distinct environments.  The once-insane and surprisingly-sane-again Prophet will hit that domed world armed with an enhanced nanosuit, a lethal composite bow and alien weaponry.

Just like its predecessors, the latest sandbox shooter is powered by developer Crytek’s proprietary CryEngine (now on version 3.4).  While the actual release isn’t likely to go down until around this time next year, they’re already offering a preorder set called “Hunter Edition,” which includes multiple bow designs and experience bonuses for multiplayer.  EA also announced several retailer-specific preorder packs that you can wait for, including the Stalker Pack, the Overkill Pack and the Predator Pack.