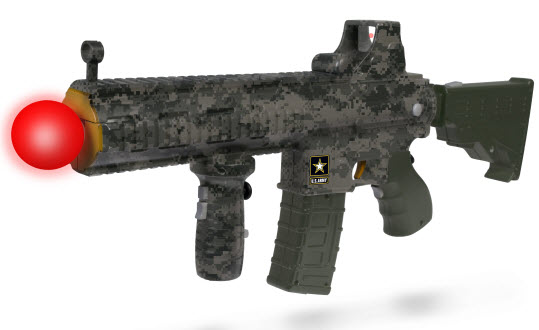 Battlefield gaming just got real, son.  Well, kind of real.  CTA Digital just announced a new line of gaming accessories that receive an official US Army co-sign, making you feel like you’re part of the nation’s bravest.  Granted, the “weapons” still look like plastic toys, but they do get some semblance of realism in design and official US Army branding.

PS3 gamers are getting most of the love for this initial partnership, as they’ll get three new handheld weapons in their arsenal.  The Elite Force Assault Rifle and Commando Assault Rifle will both function as DualShock controllers, complete with all the necessary buttons and analog controls mapped out.  The third is a Sniper Action Rifle exclusively for use with Playstation Move games, such as Socom 4 and Killzone 3.

Also included in the product line is  the Universal Gaming Backpack, a three-compartment rucksack for stashing your home console during travel.  It comes with a cushioned main storage and a black army-camo design.  Three headsets also come with the US Army release: a universal wired one with 3D effect; a wireless Bluetooth one for the PS3 and PC; and a covert-style Throat-Mic Headset for the Xbox 360 (which can remove extra microphone noises for better teamplay coordination).

Details on release and pricing aren’t available yet, but the entire line should show up at the CTA Digital’s booth at CES 2012 next week.