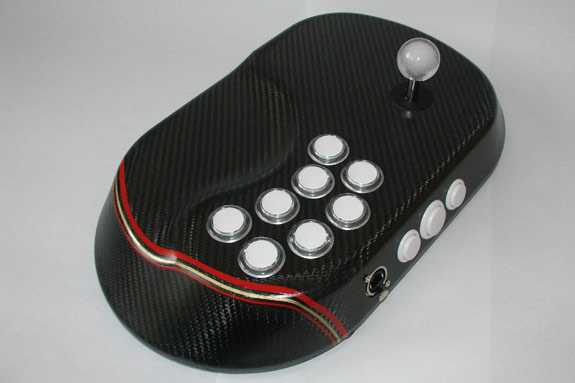 Both carbon fiber car bodies and carbon fiber watches make sense because the lighter weight offers a great deal of benefits to their owners.   A carbon fiber game controller, on the other hand, is something you fashion out of pure entertainment value.  Drool with envy at this custom carbon fiber joystick, which packs even more talents than what meets the eye.

While sporting a carbon fiber and fiberglass chassis sounds impressive enough, this custom box shines even more in its feature set.  Instead of borrowing the guts out of one standard controller, it fits in two, allowing maximum compatibility that lets it work for three major gaming platforms, namely the Xbox 360, the PS3 and the PC.

Inside the durable walls lie a MadCatz 360 retro arcade PCB (for the Xbox) and a multi-console Chtulhu dual-PCB (for PC and PS3).  It uses Seimitsu-brand buttons for all the physical controls (although the mounting plates can also rock Sanwa, according to the creator) and an Imp electronic switch for transferring between the two PCBs.  Supporting the whole thing is a 6mm acrylic bottom with rubber feet.

Despite its carbon fiber nature, the custom box still manages to weigh a hefty 1.7 kgs, largely because the case gets so much empty space inside (you can probably hide a good few trinkets in there).  Since I doubt this was built for carrying around anyway, who really cares, right?  That well-crafted stark-black case with striped accent looks so damn good, all I can think of is how much I want one too.

I’ve never really fiddled with controllers before, but the innards (photo below) look simple enough, right? 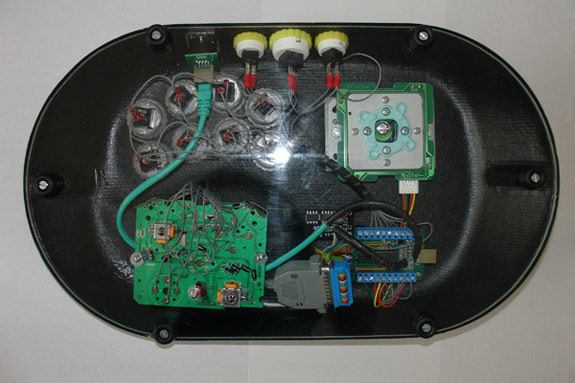