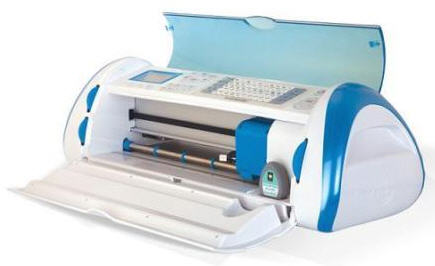 In the world of papercraft, no recent development has been more impressive than Provo Craft’s Cricut machines.  The electronic paper cutter doesn’t only turn complicated shape-making into a simple push-button affair, it gives you near-limitless possibilities by expanding its available designs via add-on cartridges.

The Blue Cricut Expression Machine is a bigger version of the original Cricut, allowing you to produce even larger paper die cuts than usual.  It comes in two versions, each one with mostly cosmetic differences.  The regular version is entirely blue (with different shades of it across the case), while the special-edition bundle is white with blue trim highlights.

Intended to sit permanently in the workshop rather than for carrying around, Expression Machines can work its slicing blades on huge 12 x 24 inch mats, letting you take on even larger-than-usual craft projects.  It works entirely without a computer, but includes a built-in LCD to let you see the words and letters that you’re typing.

Provo Craft is bundling it with two cartridges (Storybook and Accent Essentials), but it can work with the whole existing line of Cricut add-on designs (which include awesome sets, such as Batman, Superman and Hannah Montana).  You aren’t stuck with individual Cricut shapes either, as you can mix and match all of them for even more striking results.

Whether you’re putting together signage for your weekend event, decorating your kids’ room or tailoring a papercraft forest for your model landscape, the new Blue Cricut Expression Machine should let you accomplish it fast while barely even breaking a sweat.  It appears to be available strictly online for now (no brick and mortar sales for a while, according to Provo), with eBay prices ranging from $220 to $280 among various sellers.