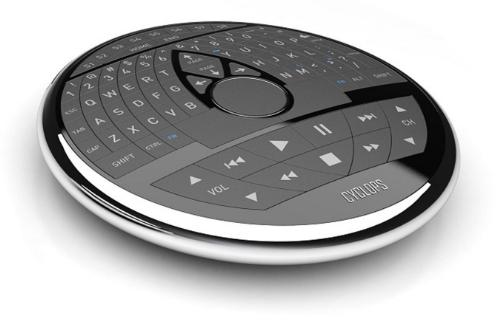 “This is the coolest controller you have ever seen,” says Genos founder Rob Shambro about their Cyclops universal remote.  It’s a claim that’s easy to swallow, as the thing looks more like a futuristic handheld from advanced alien civilizations than a humble TV remote.

Originally designed as the remote for the company’s planned GenosTV set top box, the Cyclops has probably gotten so much praise from folks they showed it to that they’re now looking to market it as its own product.  They’re targeting the end-of-year buying season to take it to market, although you can’t tell by the lack of details on the device.

The Cyclops is a universal controller clad in the shape of a very round, very polished frisbee.  Claimed to be “engineered perfectly,” it boasts an ergonomically superior experience for two-handed use.    Geared for general consumer electronics, it’s got all the usual playback buttons, along with a full QWERTY keyboard and a direction pad in the middle.  Another version, targeted specifically at gamers, is said to be in development.  Aside from IR, the remote will also get Bluetooth, allowing it to be an external cellphone keyboard so you don’t have to bother letting the controller go when you need to reply to an SMS.

Is it the coolest controller ever?  Not unless it can shoot lasers and command an army of robots, I doubt it.  But who knows?  It looks futuristic enough for that.

There’s no pricing nor exact specs for the Genos Cyclops yet, which makes the holiday arrival a likely bust.   But, alas, they’re taking orders now, so they’re at least confident.