This Batman Graphic Novel Is Probably Unlike Anything You’ve Read 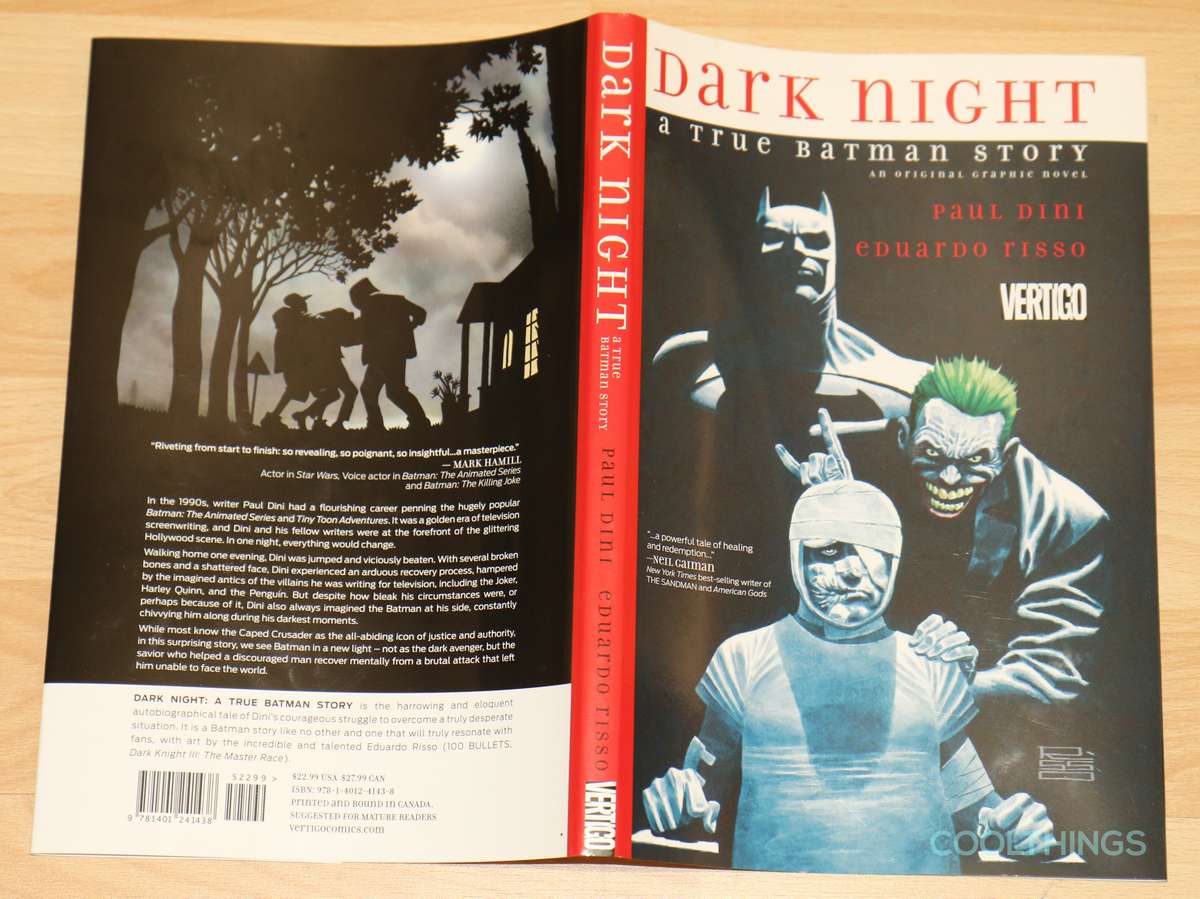 Yes, it’s a graphic novel. Yes, it has Batman in it. Dark Knight: A True Batman Story, however, is not about the Caped Crusader. Instead, it’s a highly-personal account of Batman: The Animated Series author Paul Dini’s recovery from a near-fatal beating in the 90s and the various roles Batman, along with a cast of characters, played in it (at least, in this graphic novel adaptation).

To the unfamiliar, Dini is a multiple Emmy and Eisner Award-winning writer, whose many credits include being the co-creator of Batman villain Harley Quinn. Back in 1992, while he was walking down LA’s La Peer Drive, he was approached and brutally attacked by two men, leaving parts of his skull “powdered on impact” and much of his body shattered. 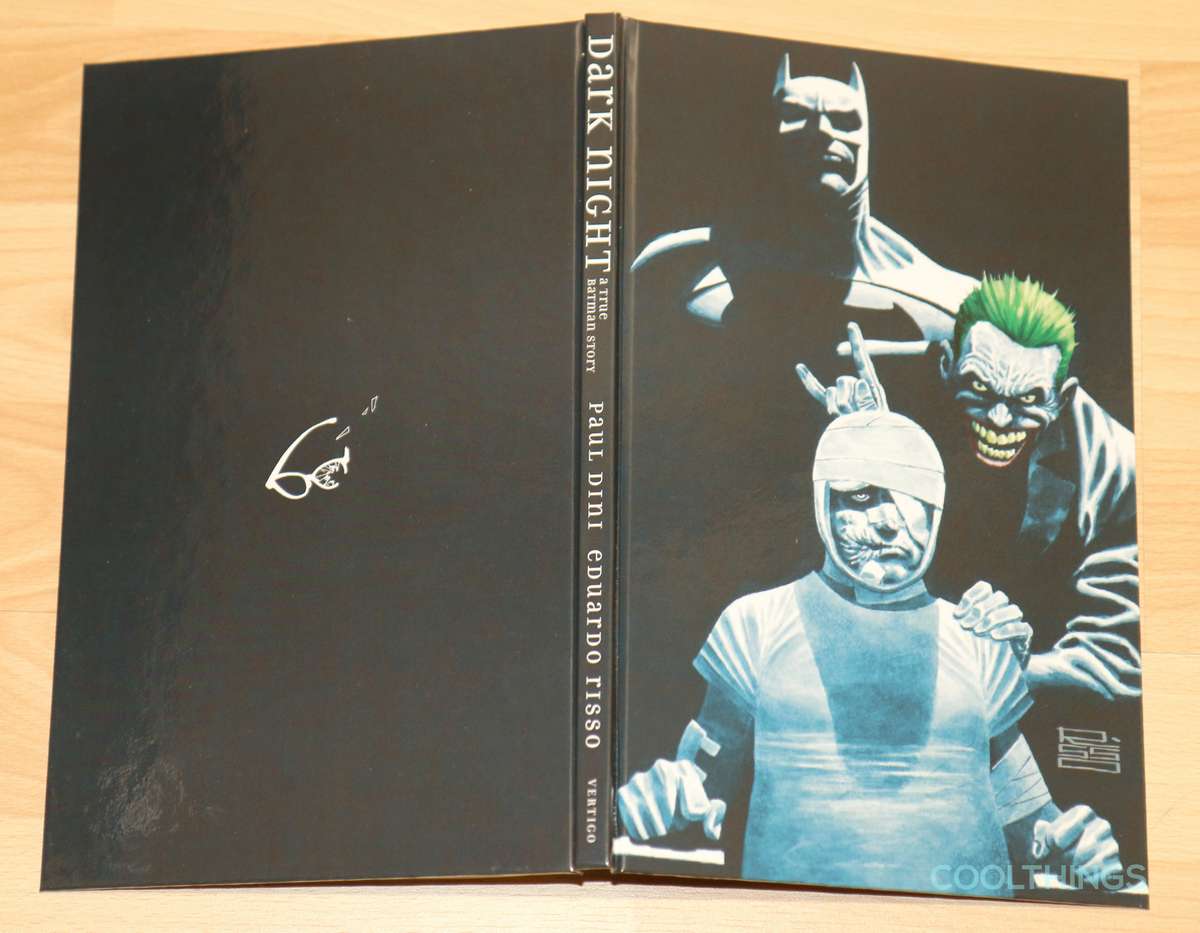 Dark Knight: A True Batman Story revisits that traumatic event and his struggle to cope with the aftermath. Being a writer who sees his characters as very real (in a “very non-insane way,” he once noted in an interview), Batman and his rogue gallery of cohorts became frequent companions during that arduous recovery process (we’re sure the pain meds helped push that along). Joker, for instance, served as an enabler, encouraging him to never leave his apartment (when he really needed to), while Batman became the imaginary hero that bolstered him throughout the darkest moments.

For an individual so deeply embroiled in the industry of writing about superheroes, Dini was confronted with the notion that the world we live in has a distinct lack of such characters, as there was no Dark Knight to save him from being assaulted in such a manner.

Despite this rather bleak realization and the subject matter of this graphic novel, Dini’s natural humor has remained an integral part of his writing. His resilient spirit is apparently on full display in Dark Knight: A True Batman Story, as the work is surprisingly far less depressing than you might imagine at first glance—particularly during the first pages, where he worked hand-in-hand with artist Eduardo Risso. From a storytelling perspective, this writer-artist combination is nothing less than kismet. Risso doesn’t simply draw the panels showing Dini’s story, he helps to tell it by masterfully adjusting the style as the story progresses from the hopeful narrative of a young superhero fan (Dini) to the hardships of his adult life. 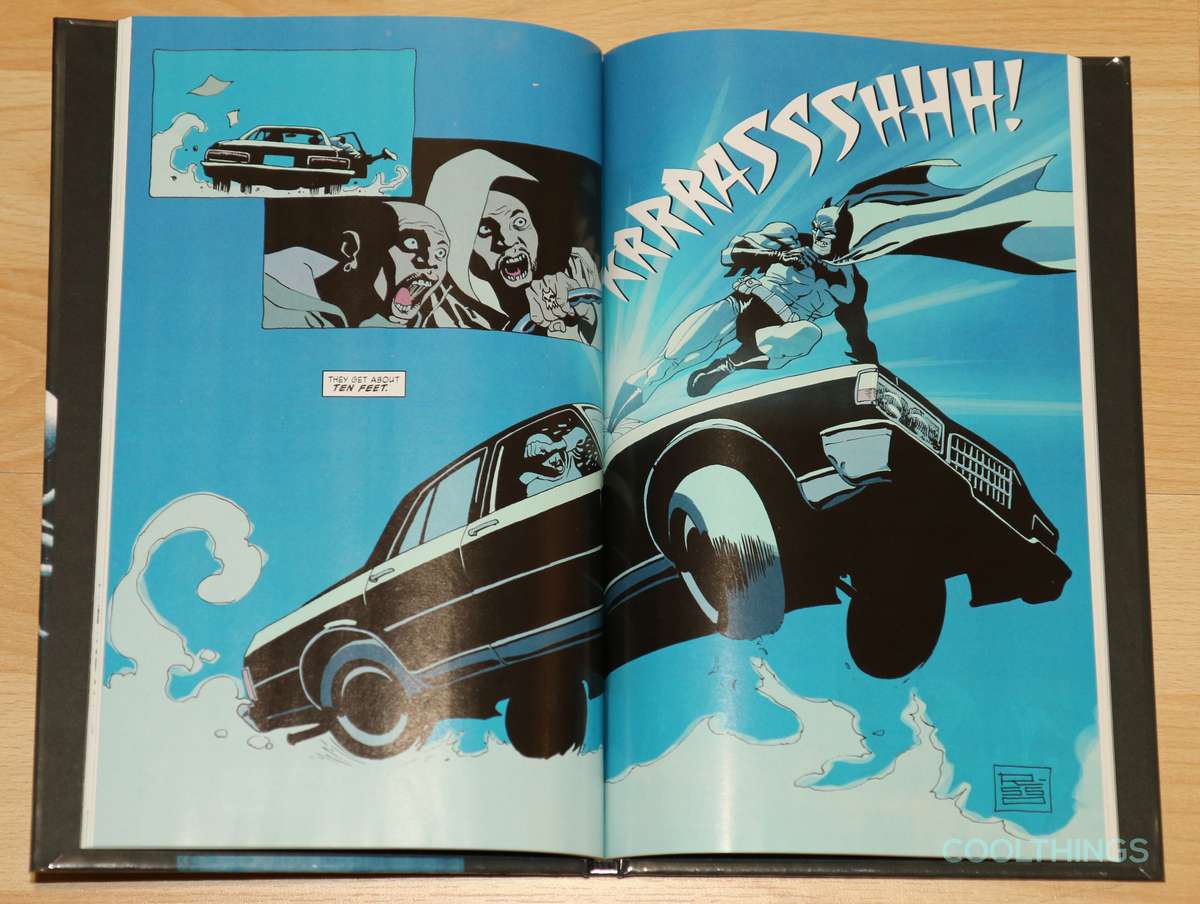 Speaking of storytelling, readers will be treated to Dini’s fascinating take on the effect of stories, their fictional heroes (and villains), and how the outlooks of those all-important characters can shape the perspectives of people out here in the real world. Throughout the story, Dini (the character) has “conversations” with a slew of Batman characters, most notably including the Dark Knight himself as well as Joker. For a writer who had and has been so embedded in the world of these characters, Dini offers a fascinating perspective on the parallels between their own internal conflicts, desires, strengths, and weaknesses and his own.

Dini experiences taunting and temptation from a familiar cast of villains, and inspiration from the heroes—but this is not the cut and dry “angels vs. demons speaking over the protagonist’s shoulder” story that you might be inclined to suspect at first. The interactions Dini shares with Batman characters falls far deeper into a gray area than you’d think—in many cases, he’s given a sharp cut that forces him to examine some unpleasant truths, not only about the night that he was attacked and the men who did it, but about the nature and status of his own life. 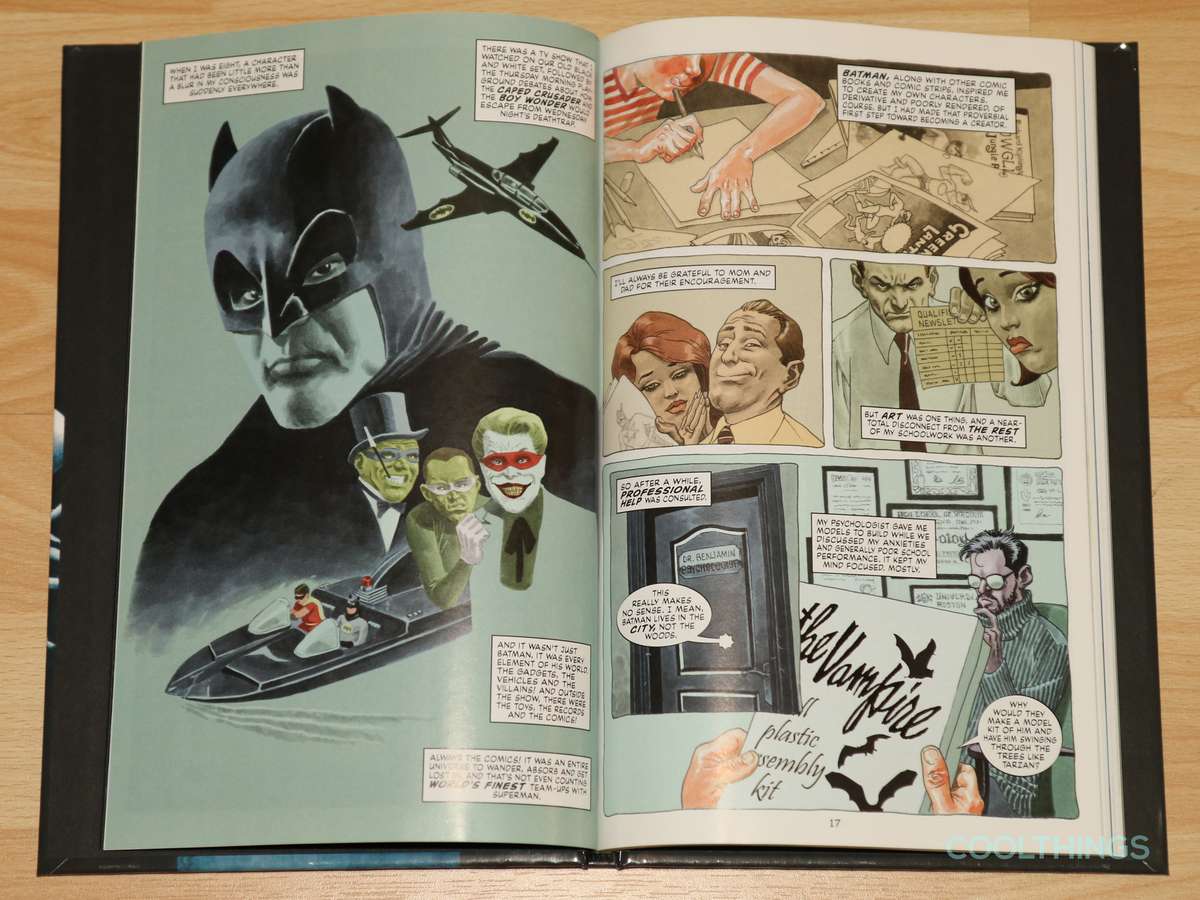 At the end of the day, this is a Batman story, and the iconic character is deftly weaved throughout the entire tale. Readers may feel that Dini is somewhat akin to Robin in the way that Batman interacts with him—both harsh and protective in his own distinct way. The villains might be telling Dini some unwanted truths in order to hurt him (or, as we mentioned, keep him locked in his apartment), but Batman provides him with a path to fight his way through it—even though it wasn’t going to be easy. 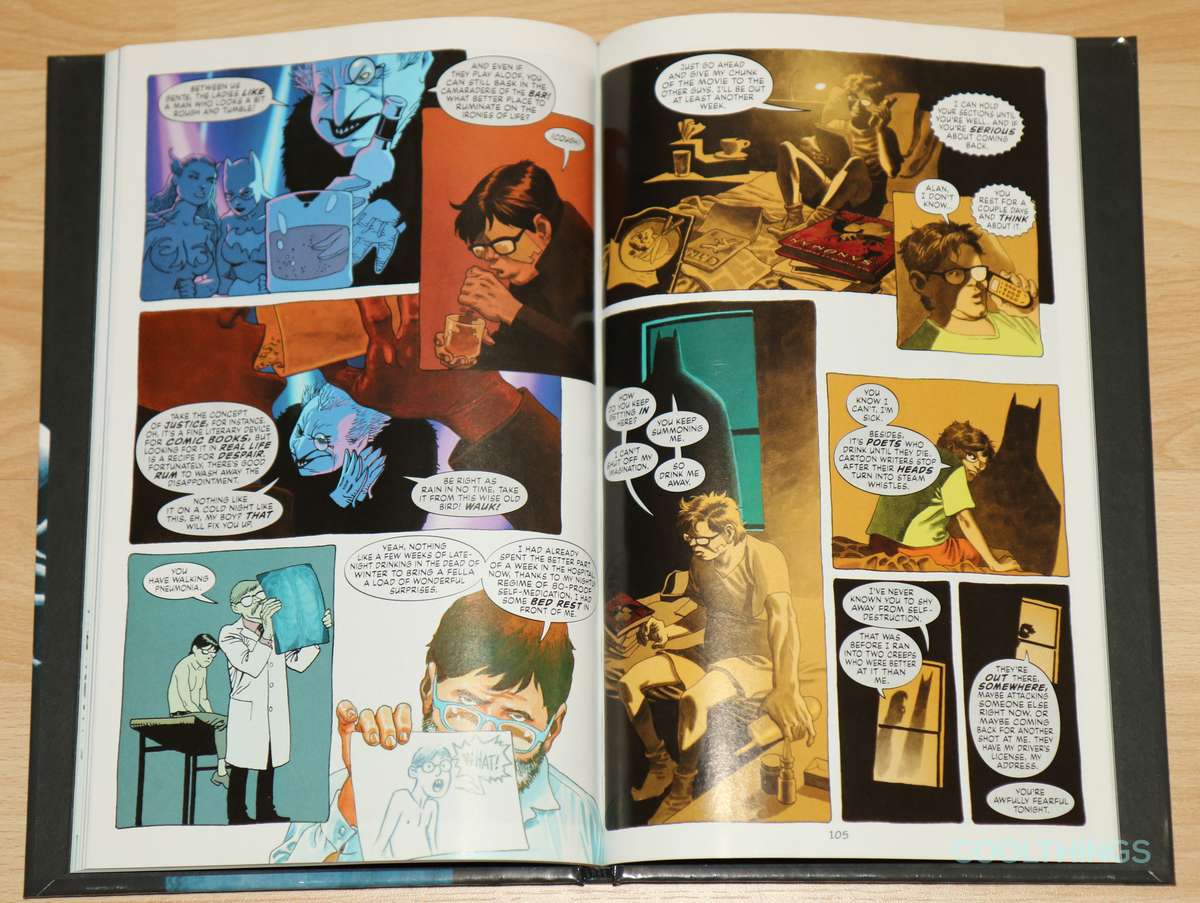 A must-read for anyone who has ever found themselves touched by a Batman story, Dini’s work is illustrated across 128 pages by Eduardo Risso, the acclaimed artist behind Vertigo’s 100 Bullets crime series. Available now in hardcover form, Dark Knight: A True Batman Story is priced at $13.89.