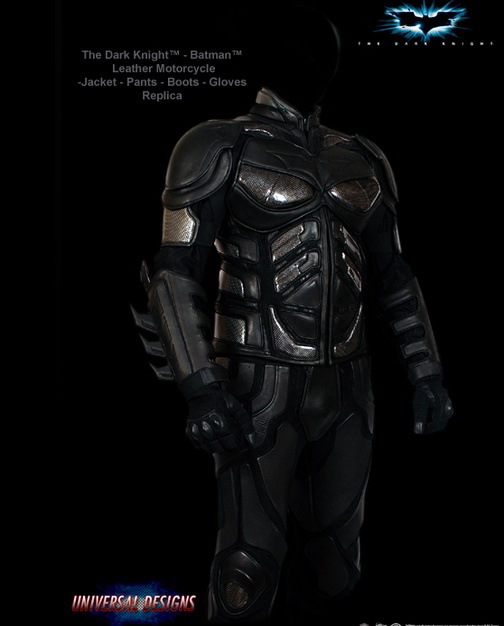 As big of a dork as you might look like wearing a Batman costume in public, you can’t deny the awesomeness behind this official replica from Universal Designs. The Dark Knight Motorcycle Suit seems every bit as authentic as you can get to the film version, making you look like a real-life Bruce Wayne in costume. Wear it with the RIPT Fusion shirt underneath and you’ll look invincible.

While it’s difficult to picture a rough-and-tumble biker actually putting this thing on, I’ve seen stranger things happen. Actually, if you take out the arm spikes and the embroidered Batman chest logo, it just looks like a badass motorcycle outfit, albeit, a little more fancy than the typical gear you can pick up at a store.

More than a fun costume, the Dark Knight suit actually offers a serious, honest-to-goodness biker ensemble. You get a heavy-duty Cordura Mesh base with 4-way Spandex inserts, a removable internal body armor (on both jacket and pants) for impact protection, leather (tanned cow hide) and kevlar outer plates, leather boots, gloves and those ominous-looking spikes. Hell, I wouldn’t be surprised if this was based directly out of the same stuff they used in the film.

It’s too bad they’re not releasing the Dark Knight Motorcycle Suit in time for Comic-Con next week. Can you imagine how many folks will actually show up to the show with this rig and a rented motorcycle if they did? According to Universal Designs, it’s coming soon. Let me tell you, though – that’s not soon enough. Expect this to fetch a Bruce Wayne-worthy price tag.