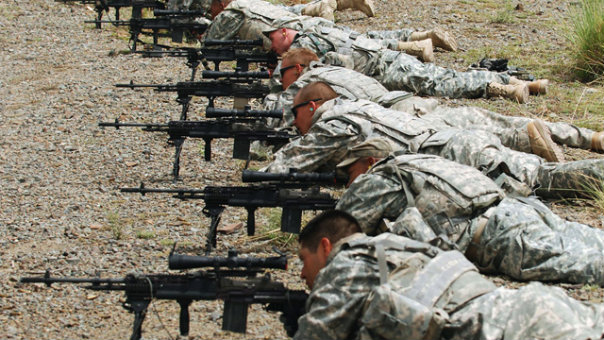 When you can’t sniper the head out of other players on a PC FPS, you cheat with an aim-bot.  Anybody who’s used one knows how much easier life becomes with it (not that their online opponents appreciate it, of course).  Soon, soldiers in the field will get the same auto-targeting action using DARPA’s One Shot system, which allows your sniper rifle to aim on its own.

Currently being developed by Lockheed Martin, the electro-optical system will do all the ballistic calculations by its lonesome, saving you from having to guesstimate where to aim that barrel yourself.   That way, you can nail a perfect shot every single time, regardless of weather conditions.  Even while you’re playing Angry Birds on your iPhone.

The One Shot system will provide direct observations of a target, measuring every variable that can affect the shot and calculating the right aim.  Parameters it will take into account include atmospheric conditions, the weapon’s effective range, GPS coordinates, aim point offset and expected crosswind.  Then, like every good weapon man has ever invented, it will kill without mercy.

Currently in phase two, the actual project started in 2007, producing a machine that can calculate ballistics for a .308 bullet at ranges of up to 3,600 feet.  The resulting product was deemed too heavy, though, and unfit for use with a standard rifle scope.  A more compact and more powerful version is expected to come out of the current phase.

Lockheed Martin is slated to deliver 15 prototypes for field testing by October of next year.