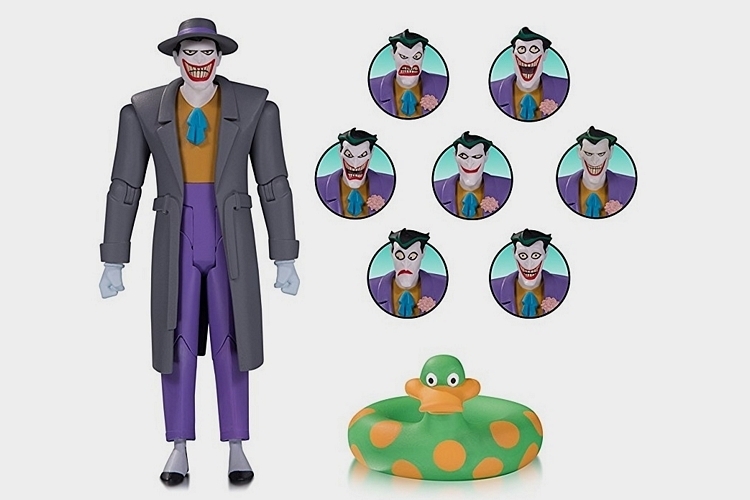 Batman: The Animated Series has one of the most interesting Joker characters, with his gigantic mouth and mischievous eyes enabling a very broad range of facial expressions. Which is why buying a single Joker action figure with a single facial expression can feel like such a waste. The DC Collectibles Joker Expressions Pack Action Figure changes that with a character befitting the animated villain’s versatile ability for expression.

Equipped with eight swappable heads, the action figure can wear a different facial expression every time, allowing you to give the Joker a variety of emotions, depending on whatever madness he’s currently engaged in. Whether he’s laughing at Batman’s excessively serious disposition, squirming in pain after getting punched in the liver, or giggling like a child after accusing a henchman of farting, this set includes the perfect facial expression to match everything together.

The DC Collectibles Joker Expressions Pack Action Figure is an articulated action figure depicting the psychopathic criminal mastermind the way he looks in Batman: The Animated Series. It comes with 22 points of articulation, so you can easily set him up in a wide variety of poses, from strangling the Dark Knight and shooting at crowd with a pistol to kicking someone’s face in and posing like Michelangelo’s David for no reason whatsoever. Yep, he’s posable enough to put in the ring and perform stunts with your WWE action figures.

Like we said, it contains eight swappable heads, all with over-the-top facial expressions that include multiple variations of his inimitable grin, as well as a couple that appear to convey distressed emotions for those times that the Dark Knight gets the better of him. We don’t know what you’re supposed to do with the other heads while they sit waiting for their turn, but we bet they can make for excellent decorations for your toy shelves on their own as well.

The DC Collectibles Joker Expressions Pack Action Figure measures 6.2 inches tall, making it the perfect size for your portable action figure toilet, all while matching up with the scale of most action figures in your collection. Aside from the heads, the set includes six pairs of swappable hands, two pistols, two Joker grenades, and even a duck pool float, just in case you want the Joker to chill out in a tabletop mansion with a swimming pool in the back. It’s designed to match up with the previously released Batman Expressions Pack Action Figure, by the way, which allows you to pair with a similar variety of facial expressions. And, yes, none of them are as fascinating as Joker’s deranged mug.

The catch? The DC Collectibles Joker Expressions Pack Action Figure won’t be available until April of next year, so you won’t be able to enjoy his expressive grandeur until then. If you want to get the first batch, they’re now offering it for pre-order on Amazon, so you can secure a unit there to make sure you get one as soon as they ship out. 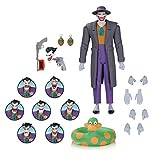 DC Collectibles Batman The Animated Series: The...
$369.99
Buy on Amazon