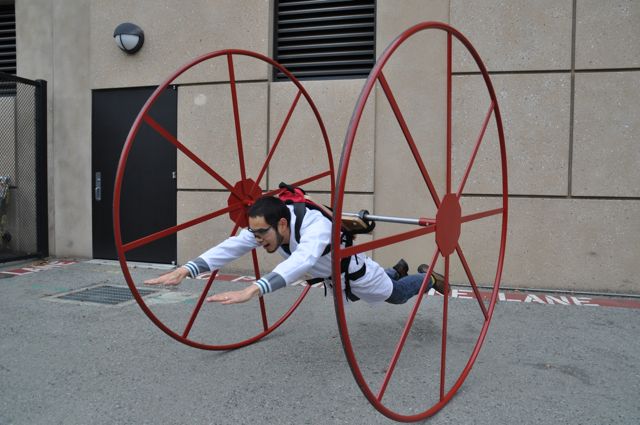 Want to simulate Superman’s flight but suffer from an indescribable fear of heights? Not a problem with the Death Wheel 3000dx, a giant pair of wheels rigged as an on-the-ground flying device.

Created by Stanford student Purin Phanichphant, the creation consists of two custom-welded oversized wheels connected to each other by a steel pipe. We’re not sure what inspired the name, but it appears to have neither a steering nor braking mechanism, making any billing with “death” on it a very good fit. In a similar way, terms like “accident,” “broken spine” and “head busted wide open” should also suffice. 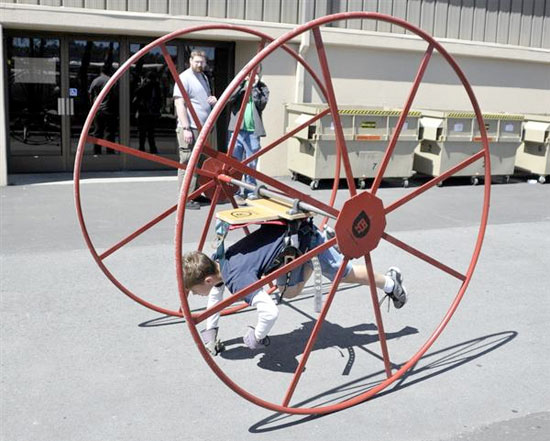 You fly using a body-worn suspension rig that attaches to the Death Wheel 3000dx’s pipe. The effect is purportedly similar to the feeling of hang-gliding, all while staying close to the earth. Since the wheel can’t move on its own, you will need to propel yourself by pushing with your hands off the ground, which is so ghetto it’s not even funny.

Alternatively, you can have a friend push you on it or roll the whole thing down an incline for natural acceleration. Extreme downhill gliding, anyone? Just keep in mind that there are no brakes or steering, so drink a magical potion of invincibility before doing the latter.