Deglon Meeting Knives Use Fibonnaci Sequence To Plot Their Design

What happens when you design a set of knives using mathematical computations, rather than their projected function?  Pretty good, as it turns out with the Deglon Meeting, a lovely four-piece kitchen knife set with proportions determined by the Fibonacci sequence.

The brainchild of designer Mia Schmallenbach, the lines of each knife were plotted using the average width of a hand as base, with the length of successive Fibonnaci numbers determining how the sides curved. Despite the seemingly arbitrary process, the result is an elegant set of four knives nestled inside each other’s frame, all of them stacked within a single block. 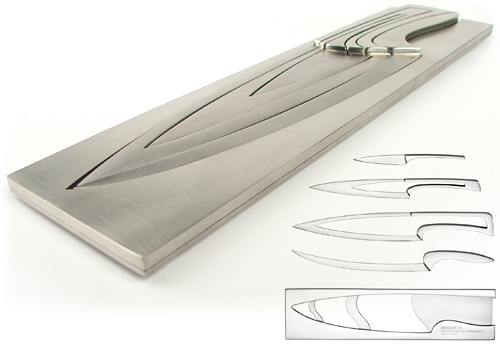 The entire block and knife set measures 13.75 x 3.3 x .4 inches (l x w x h). Block comes in either steel or wood, with rubber pegs at the bottom, anchoring it to your countertop.

Made in France, the Deglon Meeting Knives won first prize in the Fifth European Design Award for Cutlery Creation. The Chicago Museum of Contemporary Art’s online store has it for $1,200.