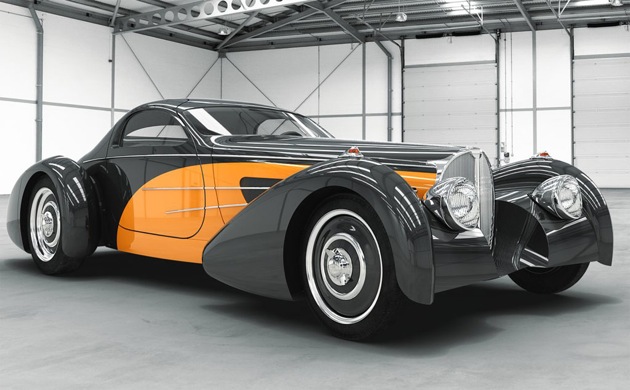 Unlike other retro kit car makers, who replicate classic car shapes into less-than-palatable forms, Delahaye USA looks to put their own stamp on them. Their new Delahaye “Bella Figura” Bugnotti Coupe, for instance, reimagines the 1937 Bugatti Type 57S into the form they envision it would have been made into today.

More than a poor carbon copy of the classic, the car uses the original as a starting point and proceeds to interpret it with a slew of stylish changes. According to the team, the design evolved over a one year period, duly influenced by illustrations from Bugatti fans and various models they’ve seen throughout the years.

The Bugnotti Coupe, which they’re billing as a tribute to Ettore Bugatti’s son, Jean, will come in either carbon fiber or alloy bodies, in three different finishes. It will use a custom chassis, currently being designed by Brent VanDervvoort of Fat Man Fabrications. They will offer different options for engine, suspension and other parts.

According to Delahaye, the coupe version will be the first car in the line, with a removable Targa-style top and a soft-top Drophead model also in the works. The full-scale carbon fiber coupe is slated to be shown off at the Retro Auto event in Pebble Beach this coming August.

Availability should be a short while after the unveiling. The “Bella Figura” Bugnotti Coupe will be sold in ready-to-run form at an expected pricing of $450,000 for the alloy version and $250,000 for the painted carbon fiber finish. A kit car version of the body will also be offered, complete with a gel coat finish for $25,000.