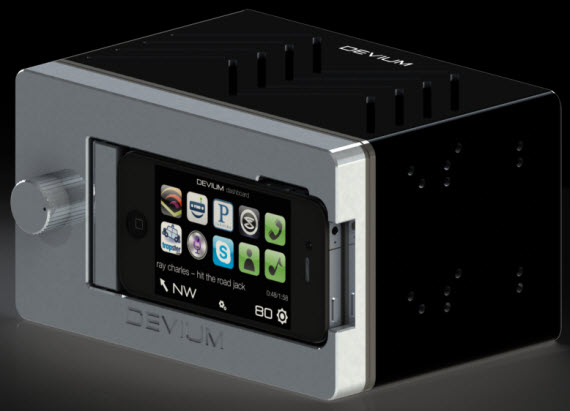 Hooking up an iPhone to your counterfeit Lamborghini’s car stereo and then using that vehicle’s built-in control system to navigate your files has always felt like a backwards way of doing things, given how functionally smart the IOS interface is.  Well, that finally ends with the Devium Dash, an in-dash stereo replacement that skips the middleman and uses your iPhone as the control board.

Originally a Kickstarter project that’s now gone into full production, it  features an easy docking slot that puts your phone right on the dash.   That way, you get to access your in-car entertainment using the same interface and applications you use to stave boredom off any other time — right from your smartphone display. 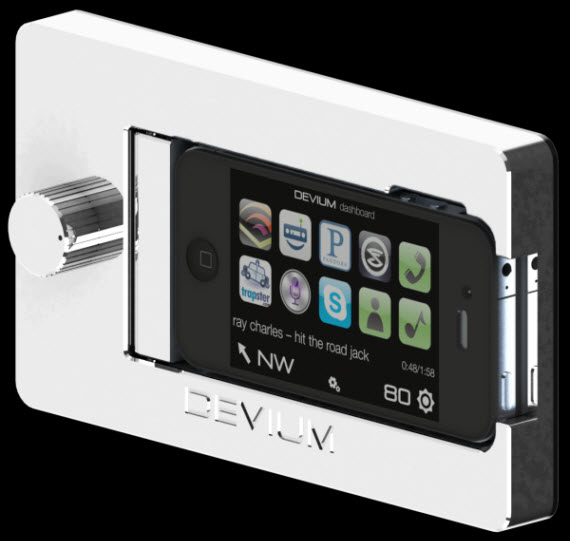 The Devium Dash is a standard double-din head unit with two parts held together by magnets (so it’s easily removable): the body (which holds all the audio and electric hardware) and the faceplate (which holds your iPhone or iPod Touch).  It can fit iPhone 4 and iPhone 4S handsets, which it secures on the  CNC machined aluminum front latch and plastic backplate.  Once hooked on, you just run your apps like normal and have all audio pipe out of your car’s stereo system.  It comes with a video pass-through, too, so you can send video over to an external monitor for your passengers in the backseat.

Features include 50W of power over four outputs (including two preamps for front and rear subwoofers), an auxiliary port and energy-efficient class-D amplifiers.  They also developed an app that’s been optimized for in-car use, hopefully minimizing the time you spend flipping through your app cabinet while staring down the road.

Shipments for the Devium Dash start in July.  The basic aluminum model is now on preorder for $289, with anodized black and white versions also available for $339 each.