Volcanic Eruptions: The New Perfect Backdrop To A Romantic Dinner 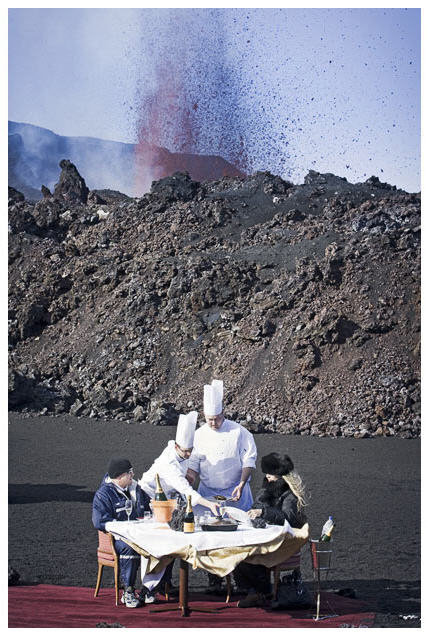 Why waste a perfectly good exploding volcano when you can use it for a little rest and recreation? These two certainly didn’t, choosing to take the opportunity to partake in a romantic meal – cooked in steaming hot lava rocks.

Thrillseekers flocked to the Fimmvorduhals volcano in the middle of the Eyjafjallajokull glacier in Iceland when it began eruptions last March 21st. We pay good money to watch disaster movies, after all, so why not make the trek to experience a deadly natural formation belch fumes, spew lava and make the ground beneath you shake in vitriolic rage? 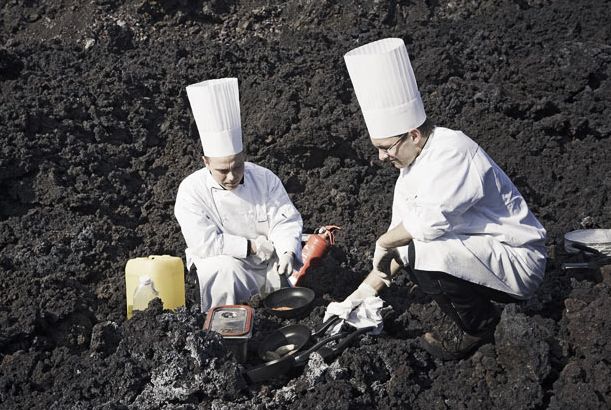 Taking the excitement further than the casual onlooker, though, the pictured pair of adventurous diners commissioned chefs from the nearby Holt Hotel to serve them a meal right in the shadow of the vengeful mountain. To make the experience even more original, the chefs cooked the entire menu on the smoldering lava rocks, which burns at an average temperature of 170 degrees Celsius. 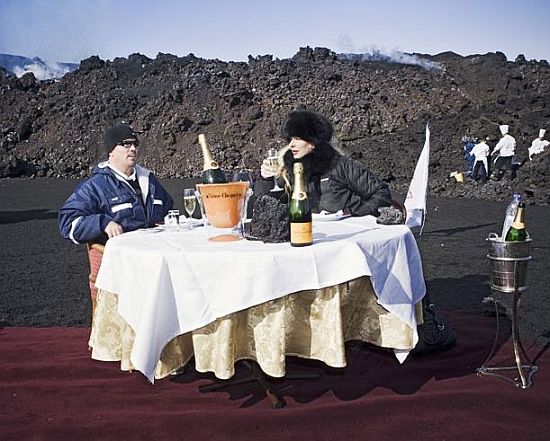 While the kitchen staff toiled over a pile of burning rocks, the couple casually waited on a cozy table for two, which was sat atop a red carpet laid nearby. Oblivious to nature’s wrath, they sipped on their champagne and dined on a freshly-cooked feast, consisting of fish soup, grilled lobster and monkfish.  Ahhh…the life.  Comfy ambiance, unique adventure and food prepared using byproducts of a volcanic explosion – not bad for 60,000 kronur apiece (around 470 dollars), which included a helicopter trip to the area, along with the fully-serviced experience.

Next stop: breakfast by the crater, with bacon fried right on the volcano’s mouth. Ummm…maybe not.