What Signature On Contract? The KGB Disappearing Ink Pen 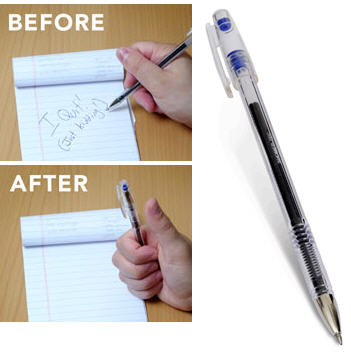 Weere you forced to put something in writing that you really didn’t want to ?

Like when I had to put it in writing for my wife that I will not use my iPad in bed anymore. Never put your signature permanently again with the KGB Disappearing Ink Pen, an erstwhile regular writing instrument armed with gel ink that vanishes after 48 hours.

Supposed to be invented by KGB scientists during the Cold War (which, by the way, isn’t the same as the Ice Age), it was used to write spy notes that left no trace for enemies to find.  With the end of that US-Russia nonsense, it’s now the perfect tool for signing IOUs you don’t intend to pay back,  writing death threats you don’t want to bite you back in court and sabotaging classmates during exams.  For the latter, just trade it with their actual pens and watch the smartest guy in class lower the passing curve.  Yes!

The KGB Disappearing Ink Pen is a 6-inch writing instrument filled with a special gel formula that allows its imprints to disappear completely in two days.  Leaving nothing but a blank page, anything previously written will not be discernible even under UV light.  And there’s supposedly nothing that can prove there was ever anything written there either, so you can use the same sheet of paper over and over.

Imagine vandalizing the snot out of everything and the evidence being absolutely gone in two days.  Awesome, right?  Suffice to say, this thing can let you get away with a whole lot of mischief.

Made in Russia, it brings full KGB pedigree too, which is always impressive.  The KGB Disappearing Ink Pen is available for $13.