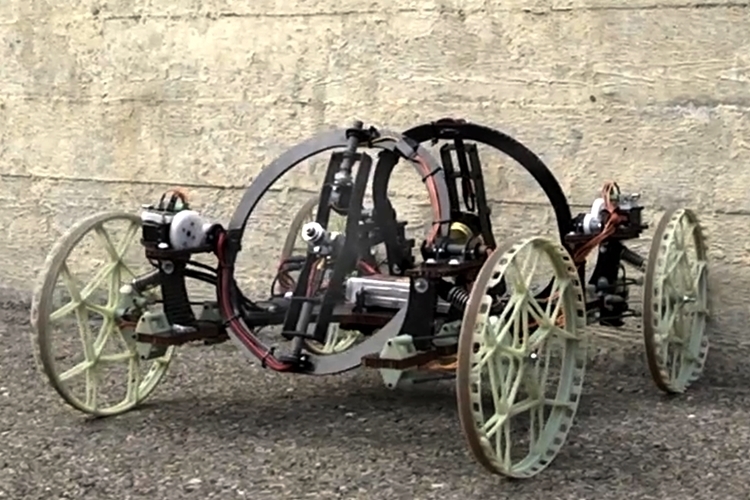 When robots that drive around on wheels hit a wall, they usually adjust by simply changing directions. At least, that’s the case with most of them (with the exception of this one that jumps over barriers). When this new robot called VertiGo runs into a wall, it simply keeps running upwards, essentially driving vertically like you’ll occasionally see cars do when watching cartoons.

Developed by Disney Research Zurich and ETH, it’s a four-wheeled robot that’s capable of running on both flat ground and vertical walls, allowing it to navigate past obstacles that would have simply stopped other robots in the past. As you can imagine, a robot that can travel that way can have plenty of applications, essentially removing many of the possible mobility restrictions whether it’s operating indoors or outdoors.

The VertiGo has a pair of propellers on top to generate thrust, which it uses to both move on the ground and keep moving even after it encounters a wall. Not only do the propellers generate downward forces to keep the robot’s wheels on whatever surface it’s traversing, they’re also steerable, which enables the unique ability to power it up vertical surfaces. When transitioning from floor to wall, the robot uses the rear propeller to apply thrust towards the wall, while the front unit pushes it in an upward direction. Once vertically set, both propellers adjusts to keep the wheels firmly on the wall while moving. More impressively, it navigates the wall with the same agility as it rides on the ground, all while having the ability to keep running despite irregularities on the surface.

Check out more about the VertiGo directly from the Disney Research website.