Scare Aliens Into Surrender With This District 9 Assault Rifle 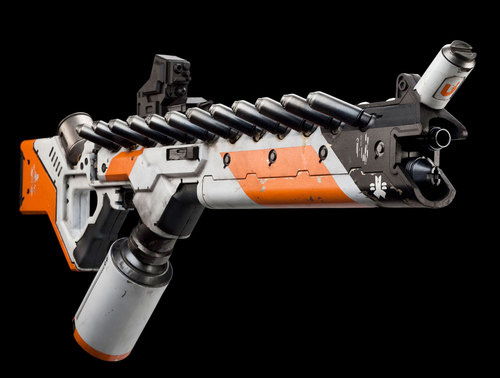 I’m not a fan of the District 9 movie (I know, I know, I suck).  As little as I could care about it, though, I have to admit — those guns were awesome.  And this District 9 Assault Rifle replica puts one of them sweet weapons right on your hands.

Made by the Weta Workshop, the reproduction rifle is a 1:1 match to the first gun Wikus van der Merwe got in the movie.  Except for the fact that it doesn’t work.  That is, if you try shooting someone with it.  Whack someone on the head, however, and that glass fibre construction could hurt.  Oh yeah, if you’re part-prawn, it might actually power up and fire (no, really).

The District 9 Assault Rifle measures 16.5 x 39.4 x 5.9 inches and weighs 12.3 lbs.   Every element of the movie version is recreated, based on both Greg Broadmore’s original designs and the actual prop used to shoot that porcine cadaver for target practice.  Made to look like it’s been put through the paces, various exterior elements of the rifle look battle-worn, bearing scratches, markings and even alien gunk.  It includes a wall-mounted bracket, so you can hang the gun at home for decoration (and, in case you’re part prawn, easy access during an alien invasion).

If you like geeking out and explaining to your friends how the gun’s supposed to work, they have a nice explanation over at the Weta website.  Basically, each tube along the side discharges a burst of gas down the length of the barrel, sending the armed projectile soaring similar to a linear accelerator gun.  It’s available for pre-order now, with a mid-June ship date.  Price is $499.