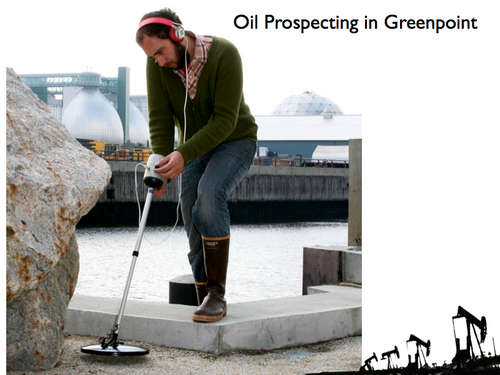 Fancy yourself a future oil magnate?  If you think fossil fuel is still the energy source of the future, you can arm yourself with the Urban Prospector and chance upon hidden oil reserves around the city.

A makeshift oil detector, the Urban Prospector can be used to scan neighborhood grounds to discover pockets of oil (along with other toxins).  According to Instructables, it should turn up plenty of hits “near oil spills, abandoned gas stations, and industrial sites.”  You’re not going to find oil reserves that will make you rich that way, but you get to wear regulation oil-proof boots and some official looking equipment while you’re at it – cool enough for me!

The device is made out of a metal detector that’s been modified to fit in a combustible gas sensor.  Instructables gives full instructions about how to build your own, noting that the whole thing costs just around $100.  They also add some green LEDs, which supposedly don’t do anything except make your contraption look way cooler than usual.  If you’re going to tote around a ridiculous equipment, it might as well look futuristic with lots of lights, right?

The original creator seems intent on using it to discover small pockets of oil around the city, particularly those left over from old gas stations and spilled from trucks.  I’m not sure you’ll make more money doing that, however, compared to just flipping burgers at McDonald’s, but I digress.